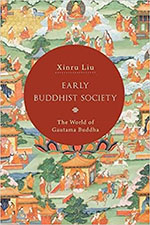 There has been no major monograph on early Buddhism by an Indian historian after Uma Chakravarti’s book, The Social Dimensions of Early Buddhism (Delhi: Oxford University Press, 1987). While the body of scholarship on the subject has been growing, Xinru Liu’s engagingly written Early Buddhist Society, originated and published by Permanent Black in India, is an important addition to the historical work on the time of the Buddha.

At the beginning of her book, Xinru Liu states: ‘It… seemed to me… that the historical Buddha in my head did not really exist in the imagination of people…. I heard debates among Indian scholars who asked whether the Buddha was a historical person or an incarnation of Vishnu; my Chinese compatriots… commonly mistook Amitabha or Maitreya for the Buddha; my students in America normally saw “the fat guy” who sat as a statue at the entrance of Chinese restaurants as the Buddha’ (p. ix). In fact, in India, the historical Buddha features in school textbooks and university curricula; he is invoked in the politics of our time, as his path has been interpreted as one of compassion, the quest for human dignity, and rationality.

A question that one needs to ask is: when did the historical Buddha live? There is continuing debate over the date of the Buddha’s death, and this has implications for dating several other historical events and texts. Xinru Liu does not engage with this issue; instead, she mines textual, epigraphic, art historical and other archaeological evidence to reconstruct ‘the world of Gautama Buddha’ in the sixth-fifth centuries BCE. This reconstruction of the middle of the first millennium BCE is not without its problems, as the chronology of the Buddha and the texts she uses is contested.