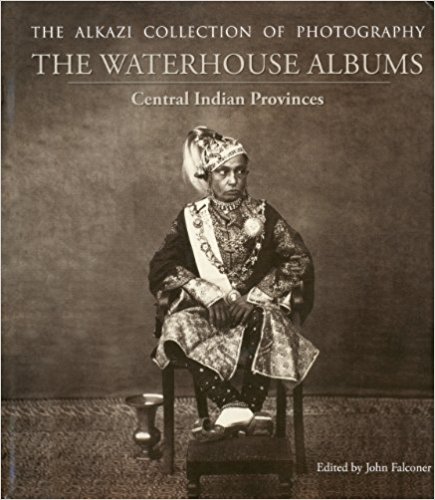 The present volume is one among a number of publications that have accompanied well-curated exhibitions based on the extensive holdings of the Alkazi Collection of Photography in New Delhi, London and New York.While editor John Falconer’s detailed introduction to James Waterhouse’s life and work in India and historian of photography Michael Gray’s essay on his technical contributions place the army man turned photographer in an appropriate context, The Waterhouse Albums is all the more interesting as other essays deal with subjects and themes emerging from the photographer’s impressive corpus. Thus, Shahrayar M. Khan who had earlier written a detailed history of the redoubtable Begums of Bhopal (The Begums of Bhopal: A Dynasty of Women in Raj India), gives us a quick overview of these ladies’ lives and Rosemary Crill of the Victoria and Albert Museum who has worked extensively with Indian textiles, draws the reader’s attention to the attire and their materials worn by the subjects of Waterhouse’s camera. Detailed captions with most photographs further enhance the value of the Albums.

James Waterhouse (1842-1922), formerly of the Bengal Artillery, was a significant actor on the expanding arena of photography in India. In his narration, John Falconer, who is Jerwood Curator of Photography at the British Library, uses the photographer’s own account of his work published between 1900 and 1901 in the journal Camera Obscura published from Amsterdam. (These have been thoughtfully included here in an Appendix). The young cadet initially sketched and painted and when attracted to the camera, could only afford the caloptype and waxed-paper processes. The use of glass plates belonged to his later career. It was when he was posted at Saugor (Sagar) that he honed his skills framing, as he wrote the ‘. . . picturesque temples, bathing places and gardens’ and by 1861, Waterhouse and his colleague Boyce Edward Gowan were making their way to Bhopal where they were hospitably received by the Nawab Begum, Sikander Jahan. The meeting was to result in a major assignment of photographing the royal women of Bhopal and was a direct outcome of a circular issued in June of that year by Governor General Lord Canning to provincial administrations.Enclosing a list of the major ethnic and tribal groups, officers were to make ‘photographic likenesses . . . of a few characteristic specimens of such of them as exist within your jurisdiction’, Canning’s initiative was to greatly influence photographic practice of the time. Though the Begum did not quite fit the stated requirements, the inclusion of selected photographs of her provided another dimension to an understanding of the term ‘characteristic specimens’!