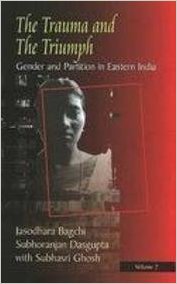 The Trauma and the Triumph is the second volume of a collection of writings and documents on the partition of India of 1947 with a special emphasis on Eastern India and on gender. The first volume had come out in 2003 and this second part continues the discussion ‘focusing more fully on both East Bengal and West Bengal.’The second volume is ambitious in scope and is divided into six unequal parts, each bringing a different kind of writing to focus on what partition meant to women differing in class, caste and religion. Part I is the creative component and comprises short stories of writers like Sulekha Sanyal and Ishaq Chakhari that are a welcome addition to the canon of partition literature. Part II are reminiscences by women either of their family members or of themselves, assessing the impact of partition on their lives. These writings also investigate the social, economic and political repercussions of the advent of a large number of refugee families in West Bengal, especially women, who were forced to come out of their homes in search of work during those years of hardship and deprivation.

The refugee women reopened questions of self-fashioning by constantly interrogating the notions of labour and family, both in the private and public spaces they had come to occupy. However, partition had a different trajectory on the other side of the border. For the women who lived in East Bengal, partition meant a different experience; this is brought out vividly in Himani Bannerjee’s essay that portrays her childhood in Dhaka and Mymensingh. After the partition when most Hindu government employees were opting to stay in India, Bannerjee’s father had decided to go to East Pakistan.