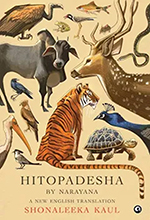 One of the best known Sanskrit classics, Narayana’s Hitopadesha is a fascinating collection of animal and human fables, augmented  with polished verse epigrams and gnomic stanzas many of which have become proverbial. This satirical, often irreverent and sometime ribald text has been popular for centuries as a composition of worldly advice on matters ranging from state affairs to personal conduct. In it, birds and beasts, men and women, scheme, suffer, lust, err, grieve and rejoice, acting as social critics and commentators on the nature of human folly.

This text’s appeal led to its translation all over India, in languages ranging from Hindi to Urdu and Bangla to Tamil. Along with the Bhagavadgita, it first appeared in English translation in 1787, followed by numerous other English editions over the next two centuries. The present translation is the latest.

The new translator, Shonaleeka Kaul, is a well-known cultural historian and a respected  Sanskrit scholar.  Her remarkable book on the making of early Kashmir  was published by Oxford University Press four years ago, as also others elsewhere on various aspects of our cultural history. The present work perhaps also speaks on the psychological needs of people in a wider framework.

The best illustrations of this work are perhaps through her translations of some lively verses scattered all over the text. Here are a few with their references:

Women have twice the appetite of men

and eight times their libido!

Neither modesty, nor decorum,

It’s only the absence of a suitor that does!

Following the above, here are some more illustrative of other human lives:

People deceived by the wicked

cease to trust even the good.