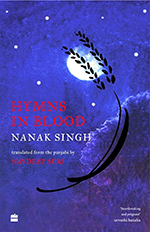 Even when read in English translation, the immediacy of experience yielded page after page in the novel, Hymns in Blood, is remarkable, especially so since it is the throbbing story of something cataclysmic that happened as long back as nearly seventy-five years ago in 1947, during Partition. Undoubtedly, this speaks for the power of the novel written originally by Nanak Singh, the master story teller in Punjabi; but also indeed, it demonstrates the translator’s skills of transporting the vibrancy of the experience from the writer’s robust Punjabi to an English that is endowed with an idiomatic cultural proximity to the original. The reader gets pulled into the cultural weave of the context, empathizes with the characters and suffers their pain and life-shaking emotional turmoils.

In his Foreword to the novel, Nanak Singh poignantly remarks, ‘This book isn’t just a novel; it is a reflection of an ache in my heart, the scream from the pits of my stomach, the wail from the depths of my soul.’ His pen wrote not with ink but with the tears from his eyes, he said. In the writing of the novel he manages to transfer a similar intensity of feeling to the reader. What is heartrending is the sheer realization that such gruesome violence could erupt amongst erstwhile amicable neighbours. The events of Partition had left people baffled. Except for a few writers such as Saadat Hasan Manto, most writers who had witnessed or experienced the unsavoury reality of Partition required extraordinary mental grit to pull out these scenes from their consciousness and muster courage to write about them by and by, sometimes many years later. In the case of a writer such as Nanak Singh, he was compelled to write not so much by the tragedy suffered by the Hindus or the Muslims or Sikhs but with what he witnessed: humanity itself collapsing as the biggest casualty. By some strange force, as he said, he wrote at the instance of a calling by what he perceived. Writing usually seeks ‘distancing’ for a balanced perspective and an effective expression. Nanak Singh was able to somehow acquire an adequate mental distancing from what had deeply shaken him to the roots to chart out the powerful novel, Hymns in Blood. He had seen the festival of colour, Holi, turn into a macabre play of fountains of the crimson red of human blood.

Though the novel is not autobiographical in terms of the specific story line, it is also not a figment of pure imagination. Even if the narration does not read like history or as a factual sequence of events lived by real characters, the depiction of division of hearts, the breaking of relationships and the forced migrations to have a deeply convincing and authentic ring. As the Hindi writer Krishna Sobti put it in the context of her own novel, here too ‘History that is not/And history that is’. It was not possible to digest the fact that the cultural cohesiveness of yore could suddenly become a  kind of Utopia, the possibility of future. Perhaps therein lay the seed of Nanak Singh’s writerly vision behind the novel that delineates the compelling power of the relationship between Naseem the young Muslim woman and the fatherly figure of Baba Bhana through the novel.

The bitterness of the communal divide and the riots make no difference to the deep connect between the two. The predominant story of the novel that lingers on in the mind of the reader then is that of love, compassion, regard for each other within an atmosphere of incomprehensible violence, abduction, loot and arson. One is left with no feelings of hatred or vengefulness towards the other, but there is bewilderment and shock that stay on. Some bonds remain unaffected by the politically generated senseless killings in the frenzy of the division of the country.

It would be pertinent here to reflect on two novels, Aag ka Darya (River of Fire in English) by Qurratulain Hyder and Zindaginama by Krishna Sobti. Both these novels were triggered by the devastating Partition that cut through the hearts of millions of people and both these authors chose to churn out narratives of the flourishing composite culture of the subcontinent; each of them a magnum opus of the writer. The evocation and celebration of the evolution of Ganga-Jamuni  tehzeeb (culture) of these lands emerged as their reaction to the tragic division that had been orchestrated by extremist forces. Nanak Singh’s novel is in sync with this vision. He consciously chooses a perspective that highlights the coexistence of the Muslim and Hindu families while also giving realistic descriptions of the tragic goings on of the violence caused by the rather abrupt announcement of the borders between the two countries (and communities!). In fact, the translator Navdeep Suri quotes him: ‘The plots in my novels may have varied but their purpose was unambiguous—to foster unity between Hindus, Muslims and Sikhs and to warn against the perils of falling prey to communal forces….’ Deeply depressed by the riot scenes, he immersed himself in the Guru Granth Sahib, the holy book that offered relief to his disturbed soul.

The Punjabi title of this novel Khoon de Sohile actually emerges from the writer’s engagement with four hymns composed by Guru Nanak. The title brings out the pain of the writer at the sight of blood all around, the result of communal violence. The spiritual strength gained from the Guru’s hymns equipped him with the detachment required of an artist, qualifying him to write this novel. The translator, Navdeep Suri, in his Afterword to the novel, provides the reader with some crucial insights into what empowered the writer to write this novel; Nanak Singh was after all, his grandfather! The intimate knowledge of the writer’s life and times obviously equipped the translator with a better understanding of the cultural roots, the sensibility and the personality of his writer. In sharing his takeaways from the process of translating this novel, he discusses with anguish, the irony of how distant the people living in the neighbourhood had become today.

In times such as the present, Nanak Singh’s portrayal of the strength of human bonding irrespective of the difference of religions, can only serve as a hope for a better future. Humanity can perhaps be salvaged only through such potent reminders by visionaries and artists, for the gruesome history not to be repeated.