A Wealth of Details 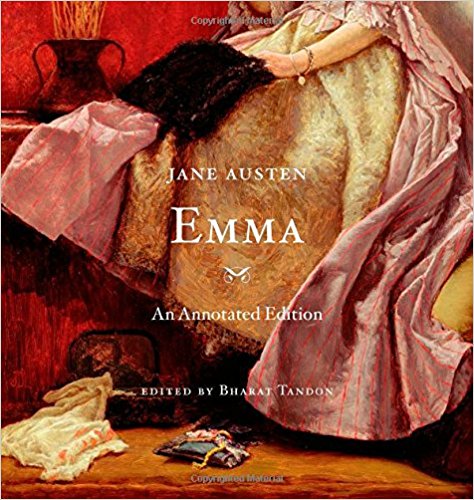 In September, Harvard University Press published an edition of Jane Austen’s Emma with annotations by Bharat Tandon, a lecturer at the University of East Anglia in the UK. The tome is the size of two bricks put together and about as heavy. So it’s not the sort of book you can lounge with. But its heft is unlikely to deter scholars of nineteenth century British literature and the most devoted fans of Jane Austen. They will be thrilled at the HUP edition, which illuminates the text by way of meticulous annotations and some lovely illustrations.

Tandon’s motive for annotating a book like Emma, which has been studied and discussed to exhaustion, is twofold. While the story is clear to modern readers, they might miss details of historical events, objects and habits that are dated. Pointing these out would give the reader a deeper understanding of the text. And in doing so, Tandon hopes to defend the charge critics have made that Austen fails to connect her novel to the history of the time, that it makes too few references to the events that were moving England and the world in the early nineteenth century, the period in which Emma is set.