A Tale of Longing 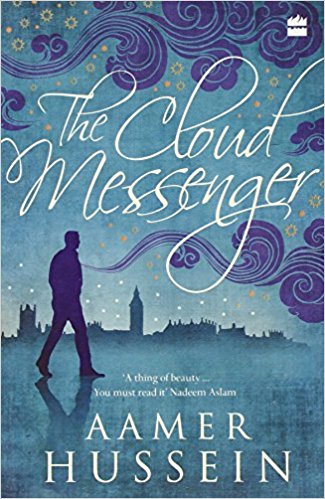 A part from the title and a semblance of the mood, Aamer Hussein’s The Cloud Messenger shares very little else with Kalidasa’s lyric poem of 111 stanzas, Meghadutam. For instance, Hussein’s narrator-hero, Mehran, is no exiled lover. Hussein’s kunstlerroman borrows the lilting romantic tenor of the poetic conceit used by Kalidasa in his sandesa kavya (message/messenger poetry). Yet, the cloud is many things for Hussein-Mehran’s relationships, Mehran’s quest for a language that will carry the burden of his ‘being’, the Urdu and Persian poetry that infuses his growth into the author-translator that he becomes, and the messages that he would like to send but remain in his thoughts. Hussein’s Mehran is the quintessential nomad, caught in the flows of a fast globalizing world.

The novel begins with the protagonist’s childhood and the introduction to his many topographies. Mehran lives simultaneously in many worlds: the world of urban Karachi and Mumbai, the monsoon-laden somnolent world of his grandparents in Indore, the romantic world of his mother’s imagination, the worlds of his academic search, the intersecting and quite often clashing worlds of his lovers and also the world of his longings. Mehran’s quest, in search of certainties is typically that of any educated upper-middle class boy of the subcontinent. A childhood spent between the ‘sandy, stony’ Karachi and Indore, a city of ‘forest, ravines and rivers’ to an adulthood spent searching for certainties in London, Rome, Karachi and Delhi. The essence of the novel is laid bare fairly early by Hussein in Chapter 2.2. Commenting on Mehran’s friendship with Ketan, the neighbour’s son, Hussein writes, ‘this was the beginning of a significant pattern in Mehran’s life. As a child, moving from place to place, he would form significant relationships—only to move on, leaving them behind or carrying them with him as figments of fleeting memory. Later the pattern would reverse—’…Mehran came to believe that people—and their affections—were like floating clouds: here one hour, gone the next.’ Mehran’s search is not limited to human relationships alone. It also embraces his linguistic and literary relationships. Mehran is an essential polyglot by dint of being an upper class South Asian. To his repertoire of Urdu, Persian and English, he goes on to add Italian. The novel is spiced with liberal inter-textual references to Kalidasa, Amir Khusrau, Ghalib, Faiz, Mir, Shauq, Mir Hussain, Nazir Akbarabadi, Rumi, Abdul Latif and even Neruda.