A Tale of Contemporary Afghanistan 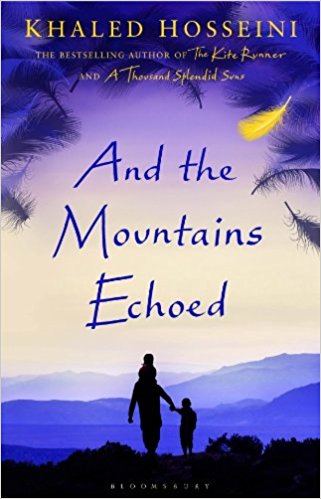 From the author of the much acclaimed Kite Runner and A Thousand Splendid Suns comes another novel set in Afghanistan, moving with its actors to Europe and America. The protagonists of this tale are a pair of incredibly close siblings, Abdullah and Pari, who live in the small village of Shadbagh, a two day trek from Kabul. Albeit spartan, theirs is an idyllic existence; playing with the local mongrel, climbing trees and collecting bird feathers for their amusement. So close are brother and sister that Abdullah treks for a day and trades in his best pair of shoes in exchange for a solitary peacock feather, all just to delight Pari.

Enter Nabi, their glamorous chauffeur uncle from Kabul, sideburns, well pressed if oversized olive suit, driving a large blue car with cream upholstery and an eagle crest on the hood. Their idyllic vigil ends abruptly and with it their blissful childhood. Pari is sold to Nila and Wadhati, a mismatched wealthy couple, Nabi’s employers.

Wadhati is a much older, closet homosexual, overtly distant and brooding, a painter with the chauffeur Nabi as his secret muse. Nila, attractive, flirtatious, attention seeking rebel without a cause is an accomplished poetess to boot. The separation is painful for Abdullah, not for the younger Pari who takes to her new life of luxury, porcelain bathrooms, gold taps et al, with aplomb. They are not to see each other again for several decades, in which they inhabit separate universes.

Here the reader loses the plot, as doth the author. Rather than trace the lives and evolution of our protagonists, as is convention, possibly with one or two sub-plots of relevance, Hosseini proceeds to merrily introduce into his tale a myriad characters. Much focus on Nabi the chauffeur, his young niece Pari who dissolves into a world of luxury, even forgetting uncle Nabi in the process; their lives described in rich detail. Abdullah and his parents who return to Shadbagh, richer for having sold their pretty daughter, yet devastated in their own ways, sink into oblivion. Abdullah returns to the tale obliquely and briefly in adulthood as a restaurant owner in America, with a daughter (also Pari), who occupies centre stage in the last quarter of the book.

The book traces the life of Nila Wadhati who abandons her ailing husband to the care of his devoted chauffer and migrates to Europe with Pari. Pari’s evolution into adulthood, as university teacher, widowed early, with children of her own to raise, and her complex relationship with Nila form part of this tale.  The myriad characters the author introduces, in the convoluted tale that takes centerstage, bring to life the evolving cultural ethos of Afghanistan through the decades of war and liberation. The challenges Afghan expatriates face on their return; the cross-cultural ethos of modern day existence in the city of Kabul; the domination of prominent mujahideen warriors turned unscruplous businessmen; the trials and tribulations of the wounded and ill; the rural urban divide, the book gives us an intimate insider view of contemporary Afghan culture. The book fails, however, to weave these into an intricate tapestry as one would expect from such an accomplished author. Several characters Hosseini introduces are incidental to the tale, blurred snapshots with questionable relevance. One gets the distinct feeling that a third of this work’s length could easily have been shelved, resulting in a well woven and more captivating tale, such as the Kite Runner.

Hosseini’s prose is beautiful as always and provokes many an emotion. People, lives, cognitive evolution over a lifetime and the emotional underpinnings are brought alive in a magical fashion, the author’s forte. Tearjerker moments include the meeting of a much older Pari with her brother Abdullah who has by this time slid into the world of dementia, leaving for her the carefully preserved box of feathers from their childhood. Facilitated by the younger Pari, Abdullah’s daughter, it reconnects two generations of a family, separated by eventful lives, the passage of history and vissicitudes of human existence.

And the Mountains Echoed is a good read; it just could have been better!

A Tale of Contemporary Afghanistan
August 9, 2017

Of Older Traditions of Scholarship
August 9, 2017