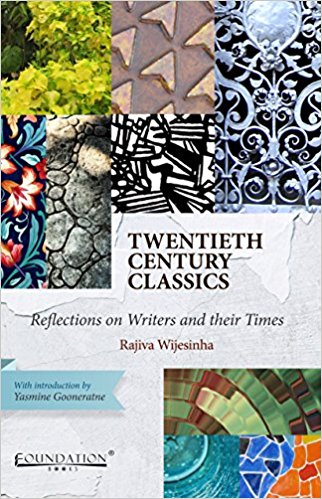 This book is a collection of essays published in a Sri Lankan newspaper The Island as a weekly column. Written by the erudite and politically conscious Rajiva Wijesinha, the book is a delightful survey of twentieth century English literature. While he threatens/promises to locate his readings in contemporary Sri Lankan politics, we find that either he has edited them out of the book or that such anchoring was provided only now and then in the original columns themselves. So apart from a few stray references to a few politicians or to the Tigers the book gives us an individual’s view of writers who have impressed him over the years for many diverse reasons. This of course brings us to look closer at the ambiguous title—how does Wijesinha hope to discuss twentieth century classics through reflections on writers and their times without discussing other works including those by the writers themselves? How is he going to identify classics, and then how is he going to justify his choice in terms of other works by the same writer? Can’t a writer write more than one classic, whatever be your definition of the term? And how can one define ‘classic’, especially when talking about the twentieth century?