The World of Modern Pakistani Art 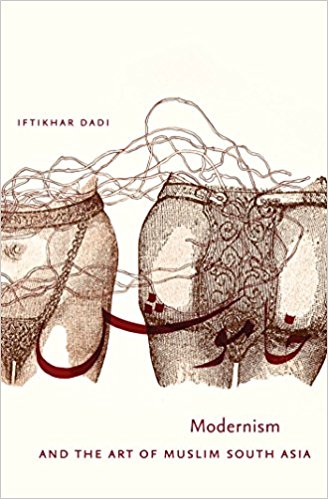 The book under review is a commendable study of modern art in Pakistan and closely analyses the work of a few prominent artists as it deconstructs notions of modernism in their work. While the title of the work makes a reference to the art of ‘South Asia’, it would perhaps have been more appropriate to restrict its scope to ‘Pakistan’ as almost all the artists and the work discussed in the book have emerged out of Pakistan. Even Abdur Rahman Chughtai, whom Dadi describes as the ‘first significant modern Muslim artist from South Asia’, remained in Pakistan after Partition. Apart from this minor quibble about the title, it must be said that the artist and art historian Iftikhar Dadi has written a well researched work filling a useful gap in the Islamic studies scholarship and extending its scope beyond studies of political, religious, literary and social developments.

One of the most important questions that Dadi tries to flush out in his book is that of the artists’ subjectivity and how it is influenced by conceptual frameworks such as nationalism, modernism, cosmopolitanism and tradition. In his exploration, he reinterprets many of these conceptual frameworks while informing them with postcolonial theory and globalization studies. For example, for Dadi, the concept of ‘modernism’ is inherently transnational rather than national or even international.

The notion that a transnational modernism informs the work of the artists discussed in the book is an important argument that Dadi perseveres with. Apart from being exemplars of transnational modernism, the art of Muslim South Asia is also cosmopolitan in a historical sense as the legatee of a Persianate cultural universe but, the art of Muslim South Asia does not inhabit a continuous tradition as there was a break during the period of colonialism affecting the form of modernism in South Asian art. Dadi also argues that the changing nature of the Pakistani state (Partition and then the separation of Bangladesh) has had a major influence on its artists.

Dadi points out that the study of Islamic art has remained restricted within the bounds of Orientalist scholarship as its study unfolded in close association with orientalism because of which it has always been compared unfavourably with the development of western art. The discursive Islamicate legacy that Muslim artists draw from is an important element in Dadi’s interpretation of the artists’ work. In his assessment of modern Islamic art in Pakistan he stresses that the artists also bring out new themes avoided in premodern Islamic art while the art work also no longer remains purely decorative or ornamental.

Dadi’s survey of Pakistani artists covers almost a century of work starting with Abdur Rahman Chughtai (1897-1975) who is credited with the revival of Mughal aesthetics in his work during the early and mid-twentieth century. Chughtai is an important artist as he foregrounded his Muslim subjectivity in his work developing a unique style in the process. While he was influenced by the Bengal School of painting his work remained distinct from it. Chughtai’s work needs to be seen in the context of the anti-Muslim dimension of the Swadeshi movement which manifested itself in the Bengal School of Painting as well. For example, the attitude of the artists associated with the School to the architecture of the Taj Mahal was not favourable at all. Thus, while the Bengal School of Painting sourced their inspirations from the pre-Muslim Indian past, Chughtai tried to consciously recover and work with the Mughal artistic aesthetic and his paintings demonstrate continuity with Islamic art.

His most well known work was the illustrations that accompanied the poetry of the Urdu poet, Mirza Ghalib. Called the ‘Muraqqa-i-Ghalib’, this work was conceptualized by Chughtai and while Mohammed Iqbal agreed to write the foreword for the album, he struggled through it demonstrating the ‘bewilderment that Urdu intelligentsia faced when encountering visual art.’ In his summation of the artist, Dadi writes: ‘Chughtai’s modernity lies in his providing the South Asian Muslim intelligentsia with the practice of visual art as a serious endeavour, to which Chughtai devoted himself with a single-minded focus over a career spanning six decades.’ Dadi’s survey then looks at the work of Zainul Abedin (1914-1976), Zubeida Agha (1922-1997) and Shakir Ali (1914-1975) who were the early modernists in the newly created Pakistan and also important institution builders. The nascent state faced numerous structural difficulties that had a repressive effect on expression which led to the emergence of an abstract modernism in art. Dadi argues that, like the Progressive Artists Group in Bombay who adopted modernism, the Pakistani artists also used aesthetic alternatives beyond direct social address. Also, the Pakistani artists chose modernism as it was more amenable to the Indo-Persian aesthetic than academic realism.

Zainul Abedin was an intensely political artist whose work on the Bengal famine was well known before Partition. A resident of East Pakistan, he developed the Bengali modernist painting based on a decorative recoding of the folk motifs of the region. He was also active in the agitation for Bangladesh. Zubeida Agha’s colourful, cacophonous, and ornamental modernism was a lifetime engagement. While her intensely abstract art was shrouded by her own reticence to discuss her work, she is hailed as the first modern artist of Pakistan. Dadi writes that Agha’s work opened up ‘modern South Asian Muslim subjectivity to the potential of modernist abstraction’. Her work also expanded the scope of Islamic art beyond historical, technical and stylistic articulations. While Agha preceded Shakir Ali in terms of inaugurating modernism in Pakistan, Ali exerted much greater influence on its development. His move towards modernism, Dadi argues, needs to be understood as the affirmation of modernism’s ‘metaphoric and allegoric potentialities in offering deeper insights into self and society…’ He was decisive in the emergence of a new generation of students and fellow artists in Lahore and his art clearly showed a certain sexual ambivalence that was relevant to his artistic subjectivity. Pakistan’s most celebrated artist Sadequain Naqqash (1930-1987) is Dadi’s next obvious choice in the linear trajectory of the story of modernism in Pakistani art. Perhaps part of the reason he was so celebrated was because his work ‘remained close to the national aesthetic ideologies of increasing Islamisation in Pakistan’. By using a calligraphic script that was imbued with modernist figuration, he created a modernist language called calligraphic modernism. His calligraphic paintings based on the poetry of Mirza Ghalib and Mohammed Iqbal is what he is best known for. Dadi writes that the term post-cubist is the best description for the relationship between his work and transnational modernism. He almost acquired the status of a superhuman creator. While he increasingly turned towards Quranic calligraphy starting in the 1960s and his work was used by the state, Dadi argues that he never created works that functioned as instruments of propaganda for Islamization and it is misleading to view him as an artist working on behalf of the state.

In the final chapter, Dadi turns his attention to artists whose work transcends the realm of the modern and spills over into the contemporary era. Marked by contemporary concerns of race and gender and use of a variety of media, the work of Rasheed Araeen (b. 1935) and Naiza Khan (b. 1968) shows a definite shift in engaging more strongly with social issues. The work of Araeen, a Pakistani born artist who moved to London in the 1960s, draws from his Islamic heritage but also from western Enlightenment and from the struggles of the oppressed globally. Khan’s work is marked by an attention to the issue of gender. By closely looking at two of her works—‘Henna Hands’ (where figures made of henna hands are imprinted in public spaces in Karachi) and ‘Heavenly Ornaments’ (a play on Maulana Ashraf Ali Thanawi’s Bihishti Zewar) Dadi argues that ‘in her work the female body becomes visible in modern South Asian Islamic art as a subject in itself rather than simply remaining a decorative motif’. Iftikhar Dadi’s concern, as he rightly puts it, is that ‘the artists’ concern cannot be fully grasped without situating them in the longer trajectory of the intellectual history of Muslim South Asia from the early modern era.’ The author, who is in the Department of History of Art at Cornell University, has done a remarkable and pioneering job in tracing the genealogy of modern Islamic art and redefining it for a clearer understanding.

Vikhar Ahmed Sayeed is a journalist with Frontline and is based in Bangalore.

A Tale of Contemporary Afghanistan
August 9, 2017

Of Older Traditions of Scholarship
August 9, 2017