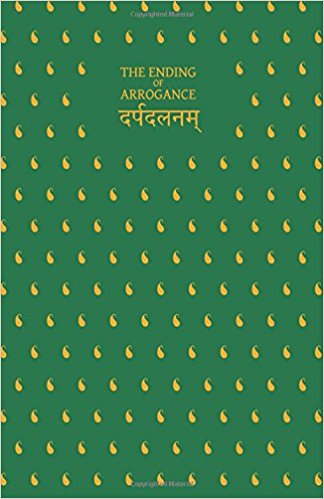 Ksemendra was a classical Sanskrit poet who flourished in the reign of Ananta ( 1028–63 CE) and his son Kalasa. He belonged to Kashmir, home to such great poets like Anandavardhana and Abhinavagupta. Ksemendra is the author of many works such as Ramayanamanjari, Brhatkathamanjari (abridgement of the classics), Aucitya Vicaracarca on poetics and Darpadalana, a didactic work.

A.N.D. Haksar is a well-known translator of Sanskrit works. A diplomat by career, ten of his translations have been published as Penguin Classics. After Ksemendra’s Three Satires from Ancient Kashmir and the Courtesan’s Keeper, Haksar has taken up Darpadalana—the Ending of Arrogance, for translation.

The text of Darpadalana was first published in 1890, translated into German in 1915. Haksar is perhaps the first to render a complete and total English translation of Darpadalana.

The causes for arrogance, according to Ksemendra, are seven- fold, namely family, wealth, learning, beauty, heroism, charity and holy penance. These deserve to be understood and eliminated. Accordingly the 587 Sanskrit stanzas are divided into seven vicharas or thoughts.

Ksemendra teaches us moral lessons and insists on a sense of discrimination which would reveal the hollowness of false pride. This satirical poetry in verse form and prose is sometimes stinging and at other times tender.

The present translation has been done verse by verse. As per the details given in the Preface some incomplete or unclear verses have been excluded. The rest have been translated in free verse or continuous prose. Sub-headings have been given for easy reading. Again departing from standard Romani zation of Sanskrit, Haksar has used the nominative singular masculine form (which is more popular) rather than their stem forms. For example, he uses the form Vali for Valin.

The story illustrated in each chapter has been done in prose by the translator. The stories are mostly drawn from the Vedas, the Puranas and the two Itihasas, Ramayana and the Mahabharata. They are naturally didactic, featuring animals, humans and divine beings. The Buddha and Lord Siva appear as heroes in two of them. This reveals the inclusive outlook of Ksemendra, says Haksar.

Haksar has attempted to be true to the text as far as possible and has succeeded greatly in this attempt. Some quaint contemporary English words like ‘comeuppance’ and ‘derring-do’ are used by him but these only help in making the meaning clearer to the reader.

There is a chapter titled ‘The Wonderful World of Kavya’ which precedes the actual translated text. According to Haksar, many readers, even those acquainted with Indian mythology are not aware of what tradition calls ‘kavisamaya’ or poetic convention, like for instance evil is black but laughter is white. So this chapter, not exhaustive by any means, as Haksar himself admits, gives details of the divine and the mythological. These details are given under the three heads—Swarga (Heaven), Bhumi (Earth) and Patala (The Nether Regions). The information provided makes for interesting reading.

Haksar’s language is lucid; his words are sharp when Ksemendra is biting in his criticism of human foibles and soft when Ksemendra gently reprimands humankind. An enjoyable read, this translation is a valuable addition to any library.