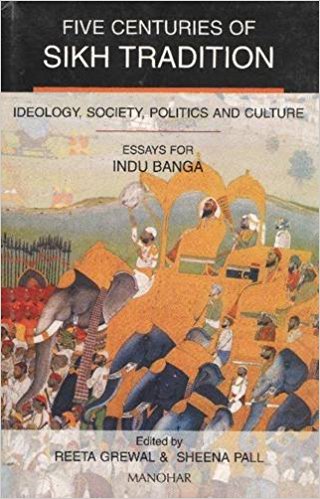 Friends and admirers of Indu Banga have come together to offer her a ‘bouquet’ of scholarly articles as a homage for her contribution to the history of India and the history of Punjab. Reeta Grewal and Sheena Pall in 2005 published these articles in two volumes. The volume under review has the subtitle of Ideology, Society, Politics and Culture. It starts with a homage by Sheena Pall to ‘Indu Banga the Historian’, followed by Indu’s bibliography. The book contains 13 chapters followed by a glossary, a bibliography, an index and the list of contributors. They cover a whole range of questions from the origin of the Sikh faith to the impact of overseas remittance in the life of Punjabi cities and villages today. J.S, Grewal, with his usual erudition and deep understanding of political and psychological events, opens the volume under review with a presentation of ‘The foundations of the Sikh faith’ in which he shows the peculiarity of Guru Nanak Dev’s message and how it differs from other philosophers or religious reformers of his time,

Kabir for example, reminding us that Guru Nanak created the main institutions which today regulate the life of the Sikh community. Grewal’s second study titled ‘Sikh Identity and the Issue of Khalistan’ comes practically towards the end of the volume (chapter 12), and must be read carefully for a better understanding of what happened and what is happening in Punjab in connection with the Akali movement and its relations with the Centre. These two studies give the lead for the volume. In between, we read with pleasure Karamjit Malhotra’s chapter on ‘The Earliest Manual of the Sikh Way of life’ presenting the Nasihatnama kept in the GND University, and Iqtidar Alam Khan’s study on the ‘Martial and Political Culture of the Khalsa’ which deals with the question of Sikh-Muslim relations from Akbar to Aurangzeb, from Guru Arjan and Guru Hargovind to Guru Govind Singh and the foundation of the Khalsa.

Then there is a jump in the studies, after the chapter by B.N. Goswamy on ‘Sikh patronage of Painting’ (chapter 4) to which we shall return later, to British India (chapters 5 to 10). Anurupita Kaur’s analysis of the evolution of the Sikh community through the various Census Reports, from 1868 to 1901, is a refreshing study through official statistics on the way the Sikhs identified themselves as such after Annexation and how the Imperial administration was dealing with the question of Sikh identity during the first fifty years of their domination. Joginder Singh, in his ‘Transition from Socio-Religious to Political Concerns: Sikh Periodicals of the Early Twentieth Century’ (chapter 6) shows how the ‘Sikh’ press evolved from journals concerned with Sikh history and diffusion of modern knowledge to more social and cultural concerns (the Sikh migrants in North America) and then to political awareness and ‘engagement’ in consideration of Muslim and Hindu cultural and political reassessment of their political entities in Punjab. A fascinating chapter by Darshan S. Tatla, on ‘Mission Abroad: Sant Teja Singh in the Western World’ (chapter 7), tells the story of the Sant working in UK, Canada and the US often in dire financial conditions to strengthen and vivify the Sikh communities scattered there. Two studies, one by Mohinder Singh on ‘The Nabha Affair: Akali Interest in a Sikh Princely State’ (chapter 8) and the other by Kuldeep Kaur Grewal on ‘The Patiala Enquiry: Paramount Power Protects its Sikh Protégé’, are interesting analyses (and remembering) as to how the Imperial Government dealt with Princely States and Princes in delicate situations, be it as a possible catalyst for popular aspiration in the case of Nabha or in what seems to have been a stark, clear-cut murder coupled with ‘affaires de jupon’ in the case of Patiala, all weighted against the ‘raison d’Etat’ of the paramount power.

Gopal Krishan, in his ‘Sikh Spatial Dispersal 1881–2001’ (chapter 10) makes the link between colonial India and present-day India and shows how the Sikh community outside Punjab and outside India evolved. His conclusion (part IV) is a good indicator of the specificity of the Sikh community in the process of emigration, mainly in the Anglo-Saxon states (UK, Canada—although it seems there are a growing number of Sikhs in the US): ‘The Sikh population accounted for less than 2 per cent of India’s population in 2001, but for no less than 7 per cent of the Indians abroad, estimated at 25 million’ (p. 256). This of course is a major source of strength for the Sikh community as a whole, not only for the remittances pouring into certain areas of Punjab and for the internal development of the state, but also for its weight in Indian politics, its significance in projecting itself abroad and, if properly managed by the Centre, in showing itself as a positive, dynamic representative of India in the rest of the world.

The question of remittances is dealt with by Shinder Singh Tandi in his paper ‘Punjab Agrarian Economy: Role of Remittances by the Sikh Overseas’ (chapter 11). This detailed approach of present-day development of Punjab out of the resources earned abroad by the sons of the land is to be compared to what we know of the use by the Centre of the resources of the Punjab coming out of the Green Revolution in the years preceding 1984. There is, I could say, a Sikh ‘tradition of modernization’, if this is not an oxymoron. How Punjab today, in its much smaller size than the ‘Greater Punjab’ of the 1900s, is modernizing in most advanced industries, high technologies, production of clean energy and a new agrarian revolution by using this income from abroad in a way which does not create more imbalance between the diverse strata of the population, but benefits the greatest number of Punjabis, is one of the challenges of the day.

We know the part played by similar issues in the simmering situation which erupted the events of 1984: hence the way J.S. Grewal tackles the question of ‘Sikh Identity and the Issue of Khalistan’ (chapter 12) as we have seen before. One of the great strengths of the Sikh community has been its constant endeavour to educate the young ones, boys and girls, and the last chapter of the book concludes with ‘Five Hundred Years of Sikh Educational Heritage’ by Gurinder Singh Mann: the author insists on the religious purpose of the Sikh educational centres in the past, designed to impart the values of the community to the young ones, and he delineates the complex relations which evolved after Annexation (1849) between tradition and modernity, with the creation of the Khalsa College(s) and, after Independence, the new universities opened in East Punjab. He pinpoints the importance of the Sikh Educational Conferences and the Sikh Students Federation. He reminds us of the connection of J.S. Bhindranwale with the centre at Mehta, draws the list of Sikh educational institutions opened abroad, mentions the chairs of Sikh studies created in Canada and the US and ends up with a list of the major academic controversies which have shaken the Sikh community since the 1920s. Concerning education in the Punjab kingdom under Maharaja Ranjit Singh, we must remember that Leitner’s remarkable study on the History of Indigenous Education in the Punjab (1883) is an excellent tool to ‘go back’ to that period and understand how the various educational institutions worked in pre-British, Independent Punjab to form such a brilliant and versatile mind as Lehna Singh Majithia’s.

I kept for the end the brilliant synthesis of B.N. Goswamy titled ‘Sikh Patronage of Painting’ (chapter 4) since it is the only one in the volume dealing with arts and history of art. It is an excellent survey and résumé of what we know now of artistic activities in Punjab, including in the dark times of the 18th century, and it is also the only chapter in the book dealing with the Punjab kingdom under Maharaja Ranjit Singh. But Goswamy also draws attention to the arts which flourished after Annexation in the other Sikh states, the ones who from the late 1790s had placed themselves under French protection (from Aligarh, in the service of Sindhia) against George Thomas, and then British protection (after 1803, Delhi) to escape the fate of becoming part of the Kingdom of Ranjit Singh. Goswamy reminds us of the development of traditional painting in the states of Patiala, Kapurthala, Jind and Naba in the second half of the 19th century. Who were the artists who worked there (Kapur Singh and Kehar Singh being only I think the top of the iceberg), some of them migrating from Lahore after British Annexation of the country, is not yet known. It is interesting to know more about them, especially in the context of some artists from these states moving ‘back’ to Lahore and joining the Mayo School of Arts, in the 1940’s to help resurrect there some of the ‘lost’ traditional arts of the Land of the Five Rivers.

Goswamy mentions just once Imam Bakhsh, the great Lahori artist, and his patrons, Allard and Ventura, the French Generals in the service of Maharajja Ranjit Singh. He did not need to say more, since my contribution to the first volume of ‘Five Centuries of Sikh Tradition’, deals precisely with this question. There was a Lahori school of arts right from the time of Kamran Mirza, with two akmé, one under Emperor Akbar and one under Maharaja Ranjit Singh. The fact that the two chapters dealing with the history of the arts are published separately, one in each volume of the ‘bouquet de fleurs’ offered to Indu Banga by her friends and admirers, is one more reason for the reader interested in the history of Punjab to buy and read the two volumes, since they are a significant contribution to the understanding of Punjab and the Sikh community in the beginning of the 21st century.

Jean-Marie Lafont is with the Department of German and Russian Studies, University of Delhi, Delhi.