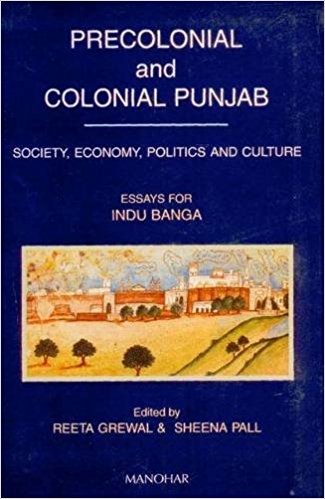 History has morphed enormously from a mere reconstruction of battles and icons into a social science with multi-dimensional tropes, so historians are in the pursuit of a specific trope which eventually becomes their area of expertise. Indu Banga remains a doyen of Punjab history on a macro as well as micro level, though has she pioneered as well as mastered the genre of urban history of the state. This festschrift, assembled by her students Reeta Grewal and Sheena Pall imbues the spheres of society, economy and culture within the ambit of pre-colonial and colonial Punjab. As far as Punjab was concerned, its history has been obsessively focused on Sikhism, its colonial phase, its agrarian genesis and the gruesome aftermath of its partition. Other perspectives like culture, sociology, economy, literature, trade and urbanization were somehow jettisoned. Punjab’s historical vicissitudes were volatile more because of its geographical stance, though its cultural moorings in early historiography have escaped attention. The book is demarcated into pre-colonial and colonial segments.

The chapters on cultural change by B.D. Chattopadhyaya in the colonial section, the French cultural infusion into the Punjabi potpourri are interesting facets, the latter particularly for obvious reasons as the colonial dimension was crafted on a singular trope, a story of the victor and the vanquished.