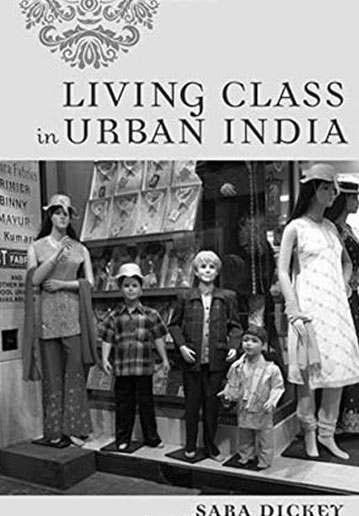 This book needs to be appreciated as a culmination of a three ecade engagement with the city of Madurai and a select set of residents who became the author’s respondents and very close friends. These close acquaintances’ lives, their troubles, travails, joys and everyday struggles are tracked in a way that they become the central cast of characters in the book and the reader is often left wondering what happens to them next as the narrative of their lives unfold. The story of their lives is set in the backdrop of the larger national and indeed global changes that have been effected to unleash the forces of globalization, liberalization and the market. These forces make central the category of the ‘middle class’ in the lives of the protagonists and the author attempts to understand the category of class from the way in which it is lived, enacted and performed in the lives she traces.

The author’s engagement begins in 1985, right in the middle of the decade of the 1980s, that decade of incipient liberalization, when the license permit raj that shackled the giant beast that is the Indian economy was still there, but was being slowly and steadily dismantled.

The more decisive dismantling was to happen with the liberalization policies of 1991, a watershed that is taken to suggest, perhaps mistakenly, a way of neatly dividing individual Indian biographies and the life of the nation itself into a pre- and post-liberalization phase.

The story of many individuals tracked by the author is one of an ability to avail the opportunities afforded by liberalization in a way that moves them very decidedly in their own assessment, upwards and into the ranks of the middle class. This is not a middle class objectively viewed through the lens of income, material possessions, and consumption, but through a more subjective understanding of individuals

and perhaps most crucially for this book’s analysis,

of how these individuals understand themselves ‘relationally’ to their own class peers and those above and below them in such a pecking order.

It is interesting to note that over a period of time the author’s respondents become more akin to being her close friends, almost relatives. There is something touching about the way the author describes this proximity between her and what has been repeatedly referred to here in this review, as the book’s central cast of characters. As an instance of how the author’s respondents have assumed the likeness of relatives, sample these few lines from the book in which the author is describing her relationship with one of the respondents: ‘Since all the members of this family and I call each other by kinship terms, I am Srinivasan’s older sister and our children are cross cousins, and he often tells me that his older daughter is my son’s murai pen—that they are each other’s rightful spouses’ (p. 169).

There is often a tendency for people from vastly different cultural and social backgrounds to be able to form some of the most enduring links with each other, across lifetimes and indeed generations. However, one is left wondering about the anthropologist’s ethical stance, especially when it comes to discussing and thereby revealing some of the most intimate aspects of people’s lives. Thus the author is led into a discussion in one instance of one of the daughters in a family eloping and how this is looked at as being a loss of face with other members of the caste. This discussion of elopement is necessitated in a discussion of marriage and there is a whole chapter, a very well written one, on marriage as one of those institutions in Tamil society through which the everydayness of class acquires slightly greater proportions as families size each other up in search of good marital alliances.

Issues of difficult and delicate questions become a little more serious when the author decides to reveal that she willingly helped out some of her respondents with money in times of need and acute crisis. There can be no doubting that this is a sensitive and sympathetically written ethnography. Yet, there is no disclaimer to suggest that the names of respondents have been changed, as is quite often the practice to protect people’s privacy. Given the warmth of the relationship between the author and her respondents, it is quite likely that she would have sought their permission to discuss such aspects of the respondents’ lives. However, the nagging difficulty of discussing deeply personal and delicate issues remains, given that one of the most central aspects of the relational analysis of class that this book has so well articulated is the Tamil word ‘mariyatai’, which the author suggests has become closely tied to dignity.

The book’s strength is the way in which the relational analysis of class is stressed and developed to look at the specificities of class in Madurai and how both class and caste practices inflect each other. It is precisely such inflection that makes the analysis refreshing and novel to read. One of the more interesting aspects that emerges here is the author’s noticing of the ‘showcase’ in the houses of the people she visits, which are the shelves, often in the main or front rooms which contain things like vases with plastic flowers, photographs and other decorative items (p. 49). This showcase becomes the kind of portrayal that an individual belonging to the household would seek to project outwards and onto other individuals, especially whenever s/he leaves the household and enters the larger public of everyday interactions. There can be discerned here, in this outward projection, an element of class anxiety, of putting one’s best class foot forward, so to say. It brings up the element of the performative in the analysis of class.

These are refreshing insights into the understanding of class. The idea of an often glass-fronted showcase found in people’s homes being used to understand the external projection of class and thereby bringing in the decisive element of the visual and conspicuous is interesting and novel, to say the least. How evocative such a visual analogy can be to understand the category of class can be sensed when one draws a parallel with George Orwell’s The Road to Wigan Pier, a book where Orwell in his extensive discussion of the class-ridden nature of English society dismisses the idea that class differences are like the opacity of a wall of stone and instead opts for a comparison with the transparency of the ‘plate-glass of an acquarium’, suggesting further that ‘it is so easy to pretend that it isn’t there, and so impossible to get through it’ (p. 145).

With the many strengths of this book in terms of its very fluid relational analysis of class, there are however two issues that the book simply fails to address even though it is so thoroughly invested in questions in and around them. The first is the question of how there seems to be a tendency among large numbers in India to so readily identify with the middle class. This tendency has given rise to a term that the media and social sciences commentariat in India have begun to increasingly use, which is the ‘aspirational’ middle class, an upwardly mobile section that aspires for a certain lifestyle dominated by certain consumerist pre-requisites. Many of Dickey’s respondents might very easily identify with this aspirational middle class. The second issue on which this book maintains an almost studied silence is the politics of the respondents that she is dealing with. The only overt reference to Tamil Nadu politics is in the eighth chapter, where the author while discussing the decision by a certain industrialist to throw a mass feast in which everyone in Madurai is invited, draws a parallel with the large-heartedness of the iconic MGR (M.G. Ramachandran). Between pages 179–181 Dickey briefly mentions MGR against the larger backdrop of Dravidian politics in Tamil Nadu.

One of the reasons that this lack of the political is being flagged in this review is that while the book has framed the question of class, specifically the middle class, very well in the light of economic liberalization, the relative silence on the political becomes that much more discomfiting. The politics of the aspirational middle class has increasingly been identified with a certain authoritarian decisionism that has readily translated itself into the electoral success of someone like Narendra Modi. This review was written in the immediate aftermath of the political uncertainty and vacuum left behind by the death of another iconic Chief Minister J. Jayalalithaa. The fact that there was a silence on the politics of the middle class in the book sometimes made it almost deafening.