A Quaint Tribute to a Quaint Idealism 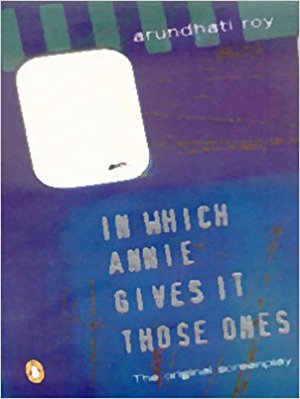 Arundhati Roy has a long history of evoking extreme reactions from those who have read her, and even more extreme reactions from those who haven’t. People either hate Roy or love her. While this isn’t necessarily a bad thing for a writer, it makes almost impossible any pretensions to objectivity on the part of the reviewer. Try asking an Indian cricket fan to be ‘objective’ about Sachin Tendulkar. He is an amazing player. He almost never delivers when India needs him the most. But he is an amazing player. Arundhati Roy is the Sachin Tendulkar of Indian Writing in English. But she isn’t interested in being an ‘Indian writer’ – anymore than she is interested in being ‘Indian’ (she’d just as well ‘secede’ from India) or being a ‘writer’ (“another book? Right now?”). But she is an amazing Indian – perhaps because she is an ‘anti-national.’ And she is an amazing writer – perhaps because she refuses to become a career-novelist.In Which Annie Gives It Those Ones is the screenplay of a film directed by Pradip Krishen. It was written by Roy in 1988. It was screened once, “late one night on TV (Doordarshan) when most decent folk were fast asleep.” But it faded into oblivion soon after. Now, for all those who missed the ‘screen version’ of the film, Penguin has come out with the book version.