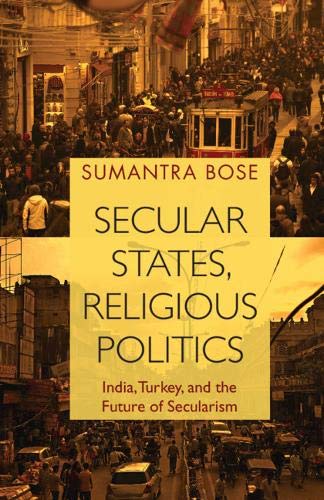 This is a rather bulky book that compares the secularism of India and Turkey. The parameters of comparison are quite obvious to merit such a study, both being non-European societies that have had decades of rather self-conscious association with secularism. In the case of Turkey the excessively self-conscious nature of secularism was established at the very inception of the Kemalist republic. In India, the self-consciousness with secularism was certainly never of such a regimented kind. However, it most certainly was one of the most significant pillars of the post-Independence Nehruvian consensus. There are significant differences that make the comparison viable as well. Turkey is predominantly and overwhelmingly Sunni Muslim (98%), while India’s 83% Hindu majority is confronted with a sizeable Muslim minority, while at the same time the unity of this Hindu majority is internally striated by the infamous caste system. Despite Turkish secularism’s deep-seated antipathy to expressions of religiosity, it has rather ironically led to the reinforced dominance of the Sunni Muslim majority against the Kurds and the Alawis. Sumantra Bose argues convincingly that Turkish secularism has actually bolstered the dominant Sunni Hanafi strand of Islam at the expense of other less dominant schools of Islamic jurisprudence. In India, the resurgent politics of Hindutva would argue that secularism has been nothing more than an instrument to undermine the Hindu majority by constantly ‘appeasing’ the Muslim minority. In both countries there can be found a full-blooded appeal to nationalism.

Bose constantly harps on the difference between secularism in the two countries in terms of the patchy presence of democracy in the case of Turkey and the more consistent experience with democracy in India. In India this consistency was interrupted just once during the Emergency. It may be considered ironical, to say the least, that it was precisely in this period that the term secularism was written into the Preamble to the Constitution through the 42nd Amendment. Turkish secularism seems to be underwritten especially through those periods of the absence of democracy, the constant menacing presence of the military and the overall general legacy of Kemalist authoritarianism.

A two-decade long stretch of democracy in Turkey especially since 1997, which roughly coincides with the colossal rise of Recep Tayyip Erdogan, would seem to have sounded the death knell of secularism in that country. In India, the two decades since 1998 (the beginning of AB Vajpayee’s extended six years of Prime Ministership) would break up into two almost equal halves of a decade apiece of BJP and Congress-led governments. In terms of an in-depth analysis, a look at these two decades and the effects that they have had in terms of the fortunes of secularism would have been an interesting exercise. Sumantra Bose somehow misses the possible centrality of these two decades, despite the close and painstaking attention to detail that he lavishes on politics in India and Turkey.