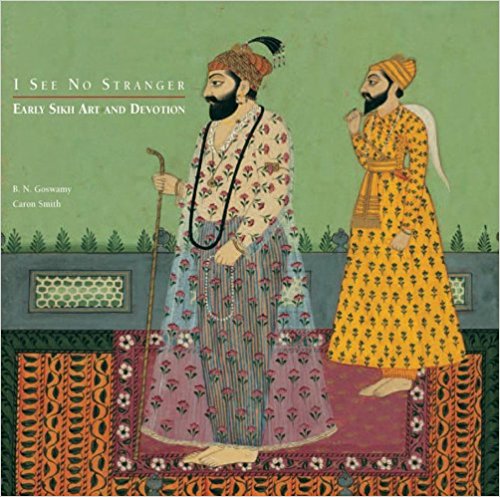 The enigmatic title of this book is taken from a beautiful verse that best reflects the spiritual and humanist vision of the Adi Granth, the holy book of the Sikhs. Na ko bairi nahi bigana, sagal sangh ham ko ban ayee. I see no stranger nor enemy: all I see are You, and You are Mine. In Sikh legend, these words were uttered by a bhisti or water carrier who was reprimanded for giving water to the woun-ded soldiers of both armies on the battlefield.

The Sikh gurus, who lived through the transition from establishment and disintegration of Mughal rule, witnessed terrible violence—imposed by rulers on their people; by upper castes upon lower castes; by men upon women; and between Muslims and Hindus. Their gentle wisdom continues to inspire many today, but is all the more remarkable for being a product of those times.

The congregation that Guru Nanak founded, and that grew and was consolidated into a separate sect by the nine gurus who succeeded him, has now crystallized into the Sikh religion. While some date the founding of Sikhism to Nanak’s own time, and others to the tenth Guru, Gobind Singh’s creation of the Khalsa1 in 1699, other historians date Sikhism’s distinct identity-formation to the late-19th or early 20th century as an outcome of the Singh Sabha movement that sought to ‘purify’ and essentialize a sect and turn it into a religion. Harjot Oberoi’s The Construction of Religious Boundaries2 offers a brilliant account of the process by which Sikhism turned from a sect into a religion. Predictably, his book has been controversial, and has offended many who need to believe their religion is 300, and not 100, years old.

We may even see the demand for a separate Sikh state, Khalistan, and the terrorism and the tumult of the 1980s and 90s, as an extreme effect of this century-old search for a distinct and pure Sikh religious community. In the last decade or so, after the Khalistan movement has subsided, many prominent Sikhs seem to be in search of community consolidation by other means, so that Sikhs can retain a sense of distinctness, without becoming divisive; can adhere to their religion, without becoming fundamentalist. This need to nurture roots without producing shooters is particularly keenly felt by the large and worldwide Sikh diaspora. Inevitably, some community leaders have turned their focus towards culture as this kind of ‘soft’ glue, and have helped to organize expositions of music, poetry, art and architecture of the Sikhs. Particularly since 1999, when the tercentenary of Guru Gobind Singh’s baptism of the Khalsa was celebrated, a number of Sikh art exhibitions have been held in prestigious museums in India and abroad. Many of these exhibitions have been initiated by prominent Sikhs, and have been partly funded by Sikh foundations and have drawn upon the private collections of Sikh art assembled by wealthy Sikhs.

Thus in 1999, the Victoria and Albert Museum in London organized Arts of the Sikh Kingdoms, a glittering exhibition that travelled across the Atlantic to the Royal Ontario Museum and the Asian Art Museum in San Francisco; the National Museum in New Delhi organized the elegant Piety and Splendour; the extensive Maharaja Ranjit Singh Lord of the Five Rivers was shown at the Maharaja Ranjit Singh Museum in Amritsar. In 2003 Dr. Narinder Singh Kapany, a Bay Area art collector endowed a permanent gallery of Sikh art in the Asian Art Museum in San Francisco; and in 2004 the Smithsonian Institution installed a long-term Sikh Heritage exhibit albeit in its Natural History, and not one of its Art Museums.

In 2007, the Rubin Museum of Art in New York, a relatively new museum devoted to Himalayan art, organized I See No Stranger, its exhibition of Sikh art. The book under review is the catalogue of that exhibition. As with the V&A and National Museum exhibitions, the eminent scholar of Indian painting, B.N. Goswamy, is a principal author of this book, along with Caron Smith, the Deputy Director of the Rubin Museum.

This flurry of exhibitions and books would seem to signal the ‘arrival’ of Sikh art as a distinct category within the history of Indian art. Yet ‘Sikh’ art remains an elusive thing. If one uses the term ‘Sikh’ like the terms ‘Mughal’ or ‘Pahari’ to denote a category of patrons, one will deal (as the V&A show did) largely with works made for the ‘Sikh Kingdoms’—Ranjit Singh and his successors in Lahore; his governors in provinces, or even his precursor misldars who did not have stable kingdoms. There are also the dynasties in smaller Sikh states like Patiala, Nabha, Jind or Kapurthala. Unfortunately, most of these states have a brief history in which real power and autonomy was lost to the British some decades after their founding; not enough time for a really distinctive cultural style to develop. Even within works produced for these courts, one must take cognizance of many works with secular, or decorative, or erotic, or ‘Hindu’ themes. Of course it is hardly surprising that a prince would commission secular, or decora-tive, or erotic works of art; but for those who wish to see historical heroes living by today’s mores, it is difficult to digest an image of Maharaja Ranjit Singh paying his respects to the Devi in a temple (Arts of the Sikh Kingdoms, Fig 124). Puranic and Vaishnava themes are frequently depicted in the murals and manuscripts of the Sikh kingdoms. As B.N. Goswamy said in his essay in that book, ‘the sharp distinction between Hindu and Sikh themes … belong(s) to a period much later …’; most Sikh princes paid reverence at Sikh, Hindu and Sufi shrines and this would be reflected in the art patronized by them.

If the art of the Sikh courts does not do enough to support the desire for a distinct, Sikh identity, one may turn towards the artists, rather than the patrons. Were there Sikh artists who produced art that might stand for the community’s voice? There are few records of the artists who were working either for the courts or for the merchant middle classes in 18th and 19th century Punjab. Those painters that we know of were Hindu or Muslim migrants, either from the crumbling Mughal court and its successor states; or from the Pahari kingdoms; for the merchants and wealthy landowners, the itinerant Kashmiri painter-scribes were available to make copies of religious books and horoscopes and other useful items that required writing, illumination and illustration. Only in the late 19th c, in Company School works from Punjab, does one hear of Kehar Singh and Kapur Singh, talented artists with Sikh-sounding names. Given this dearth of painters, the Sikh craftsman community really worth studying would be the Ramgarhias, the carpenter-caste whose superb wood carving and inlaying can be seen in every 19th c survey of the industrial arts of India, and whose most famous member would be Bhai Ram Singh, who rose to be the Principal of the Mayo College of Art, Lahore, and was the architect of many of Lahore’s colonial landmarks.3

Finally a third method by which one might constitute a ‘Sikh’ art tradition that satisfies today’s identity needs, would be by examining only works that are devoted to Sikh themes. This approach would allow one to exclude the uncomfortable evidence of an earlier and more catholic age. However, it has its challenges too. Sikhism discourages image worship; as a result there are few depictions of the gurus or even of events from Sikh history. The popular exceptions to this are the many illustrated manuscripts of the Janamsakhi, an account of Guru Nanak’s travels and teachings, which combines hagiography with Sindbad-like adventures. There are also illustrated and illuminated manuscripts of Sikh scripture, a rich and daunting area that awaits full description.4 And finally, there is the record of Sikh peasants, craftsmen and daily life that were painted for European officials and travellers in the 19th century. To find sufficient works of ‘Sikh’ themes, one must include paintings made for a wide variety of patrons, at different levels of patronage, made by a wide variety of artists, in different places across the centuries, and with different intentions. One must also, I feel unfairly, pull them apart from a broader picture of the life and culture of Punjab as a whole. In I See No Stranger Goswamy and Smith choose this approach; the book confines itself to paintings of exclusively ‘Sikh’ themes. After the introductory essay, the book has a long catalogue section where the focus is thus on Janamsakhi illustrations, portraits of the gurus and some Sikh chiefs, and Company paintings of Sikh artisans. Apart from paintings, the catalogue also has a few vessels and accoutrements used by ascetics, and embroidered phulkaris. Here one particularly feels the unfairness of presenting more general traditions as though they were exclusively ‘Sikh’.

The book would no doubt be a useful introduction to the subject for American readers and many of the paintings reproduced here are attractive. However, readers in India who already have a copy of Goswamy’s Piety and Splendour may not be inclined to buy this book by Goswamy and Smith as most of the artifacts and text from the catalogue section are to be found in the earlier book, or in the even earlier Arts of the Sikh Kingdoms. A few items published here for the first time are of interest, however.

There is for instance a drawing that is meant to show Guru Nanak in the presence of the Nirankara: the One without Form. But the painter, unable to paint formlessness, shows Nanak attending an icon of Vishnu. The gap between the demands of the novel subject and the artist’s formulaic response becomes an interesting space to explore. Possibly the most interesting object this book brings us is the ‘Janamsakhi scroll’, a large sheet with 74 thumbnail sketches of scenes from the Janamsakhi. This was probably kept by an artist as a memory aid for all his Janamsakhi projects; the authors plausibly suggest that painters copied sketches like this from each other or from pre-exisitng books, explaining the surprising uniformity of narrative approach in Janamsakhis painted in places far apart from each other.

References: 1 Literally, ‘pure’; applied to followers who choose to be baptized and follow a strict regimen. On Baisakhi day in 1699, Guru Gobind Singh asked for followers who would give up their lives for him; the five, whom he pretended to behead were then baptized as the first five Khalsa who in turn baptized the Guru. 2 Harjot Oberoi, The Construction of Religious Boundaries: Culture, Identity and Diversity in the Sikh Tradition, OUP Delhi 1994. 3 Bhai Ram Singh Mistry is the subject of a recent book by Pervaiz and Sajida Vandal, The Raj, Lahore and Bhai Ram Singh, National College of Arts, Lahore, 2006. (see following review) 4 Jeevan Singh Deol has so far published only brief essays from his remarkable work on illustrated and illuminated manuscripts of the Adi Granth [in Kavita Singh (ed) New Insights into Sikh Art, Marg, Mumbai, 2003, and Nishaan 2003: Vol IV.] The great reverence paid by Sikhs to their holy book results in a resistance to scholarly objectivity, a problem faced by textual scholars as well as scholars of visual studies. Kavita Singh teaches art history at the School of Arts and Aesthetics, Jawaharlal Nehru University. In 2003 Marg published her edited volume New Insights into Sikh Art. She is currently working on the history and politics of museums in India.