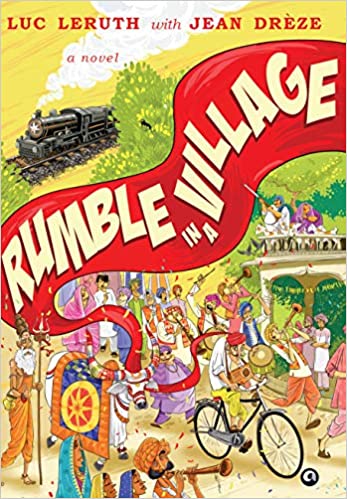 Rumble in a Village is an entertaining addition to literary representations of twentieth century rural India. In some ways reminiscent of Sri Lal Shukla’s Raag Darbari, this novel is a collaborative effort of the Belgian born Indian economist Jean Drèze, and his friend and writer Luc Leruth. While Leruth has previously authored fiction set in India, this would be Jean Drèze’s first in the field, a departure from his previous publications on public policy and developmental economics. As the Preface of the novel introduces to the reader, Rumble in a Village is a blend of the personal, historical and the imaginative, as it fictionally animates Jean Drèze’s notes from the 1980s, which were made during his research work in Uttar Pradesh. The novel, as its title suggests, is a delightfully organized chaos of various intertwined lives in the village of Palanpur in western Uttar Pradesh. Though the narrative sets itself as a murder mystery, this trajectory is effortlessly interrupted, if not displaced, by the witty, light-hearted and realistic observations of the British Indian, Anil Singh.

Rumble in a Village traces the journey and experiences of Anil Singh, a banker living in London in the 1980s, following an unexpected call from India informing him of the death of his uncle and the recently acquired inheritance in Palanpur. Despite the initial indecisiveness, with the encouragement of his ‘true hippie’ white girlfriend Pat, Anil decides to travel to Palanpur—to ‘explore his roots’, click some photographs, become a ‘gentleman farmer’ and perhaps produce a coffee-table book from his chronicles in Palanpur. What await Anil in the village however are intricate webs of social relations, unforeseen encounters and commonly held secrets.