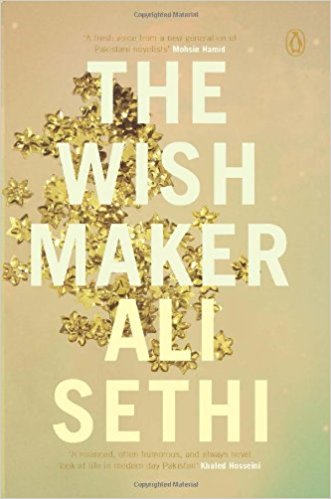 Books by young men who have studied abroad always seem to begin in aeroplanes. The moment you read the first lines—a description of the view from a window as a flight to Lahore comes in to land—it is evident that The Wish Maker is unlikely to defy the conventions that have sprung up around what is now a flourishing subgenre: the novel of explanation, in which a young Indian or Pakistani sets out to somehow explain to a newly-interested world the nuances of his country’s past and present, with its coming of age neatly coinciding with his own. It also becomes obvious almost immediately that Ali Sethi’s talent for observation and for spare, vivid writing might be capable of helping this book transcend the convention. Living through recent Pakistani history must indeed be like reading all four hundred or so pages: you approach each crisis with hope that the underlying potential will burst through, but, quite a while later, you’re back where you started, left with a vague sense of disappointment.

It seems a pity, actually, that Sethi allowed himself to self-consciously submit to writing a book of this scale and ambition. A novel-as-explanation cannot really leave anything out, lest the writer worry that he is illiberally glossing over something that is an essential part of the glorious complexity of ‘Home’. So here we have military coups, of course, and elections, but also Ahmadis and Muhajirs; lawyers, journalists and army wives; two different partition stories; an interlude in a village, and another sequence in a feudal holding; two weddings and a funeral; the misogynistic Black Laws, sexually confident city girls, and diffidence about alternative sexualities; a cameo from Faiz Ahmed Faiz; coaching centres and a very la-di-dah school over acres and acres in the middle of town. Yet the book actually grew out of a short story that he wrote for an Amitav Ghosh writing class, and what he says were ‘the sounds and sights rushing back’ should perhaps more profitably have been marshalled into something smaller and more narrowly-focused. He would not have had to deal with the roughness of his transitions between episodes; and his eagle-like eye for detail would have come through better.