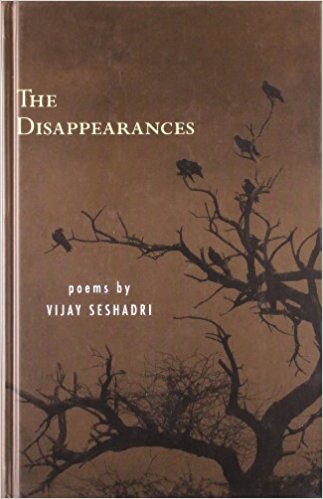 Vijay Seshadri’s two earlier collections, Wild Kingdom and Long Meadow (Graywolf Press, 1996 and 2004 respectively), have already been reviewed well. Richard Wilbur, Frank Bidart, Evan Boland, and Campbell McGrath (the known and the lesser known ones) have noted his poetic merit in unmistakable terms. The Los Angeles Times Book Review, The New York Times Book Review, and The New Yorker had words of praise for him. Seshadri has invariably published in western journals and compilations and has received support from National Endowment for the Arts, the McDowell Colony, the New York Foundation for the Arts and Alice Quinn. Indications enough of a poet making good way and getting good notice! A collection of fifty two poems written over a period of ten years or so, The Disappearances, is a compilation of his two earlier books. Praise be to Harper Collins for getting him to the Indian readers. Welcome Seshadri. Welcome home via western press and western notice!

What do we expect from Seshadri who has lived in America ever since his early childhood, has been teaching there for long, and has written, published and produced two collections of poems only there? How do we read him? As a disaporaic poet? No, not as one of the kind for that has a dubious distinction of being a much-celebrated construction as also a much-maligned one during all these years. Seshadri is a relief for he does not necessarily write like one. Or shall we read him as one who defies easy classifications? May be yes, and for good reasons so. In fact, Seshadri is a poet who tries to negotiate between a moment’s mood and a moment’s language, and the two trying to acquire certain concrescence, a certain span of life.

Seshadri is quite prone to creating acute metaphoric configurations. The abstract and the concrete, in a row, vie to acquire a space for themselves. His images are rooted in his own locations of time and space; his experiences are embedded in them. His allusions are personal; his references of his own make. All of these taken together, create varying levels of difficulty for the reader. But the reader enjoys being called to negotiate with the nuances of word and meaning that his poetry creates. He is a poet of empathetic apprehensions, of turning the divine into human (‘Divination in the Park’), of extinction and extension of personality (‘Too deep to Clear Them Away’). He plays with appearances and disappearances (‘The Reappeared’), creates his landscapes of belonging (‘Elegy’), and achieves structural elegance (‘A Sketch’). He can discover affinity with a given space (‘The Testimonies of Ramon Fernandez’) just as he may study a character and a situation separately and together (‘This Fast-Paced, Brutal Thriller’). He may well metamorphose incidents and moments (‘The Language War’), turn a composition into a technically proficient one, (‘A Preservation Society Minute’), as much as he may create sequential paradigms (‘The Gulley’). He can write orchestrated stanzas (‘Let me Play the Lion Too’), control a delicate narrative, (‘from An Oral History of Migration’), and enliven frozen moments (‘The Lump’). Seshadri has the creative potential to discover unusual linguistic structures (‘Witch Elegy’) as he has the capacity to seek his passage through spots, and events of life, and look for evens among odds (‘North of Manhattan’). Places and personages mingle in many of his poems (‘Thelma’) as do moods and moments of the states of being. Just a sample would make my point to a certain extent and show his sensitivity, his creative agility, and his aphoristic capability: