A Love Letter to the Wilds 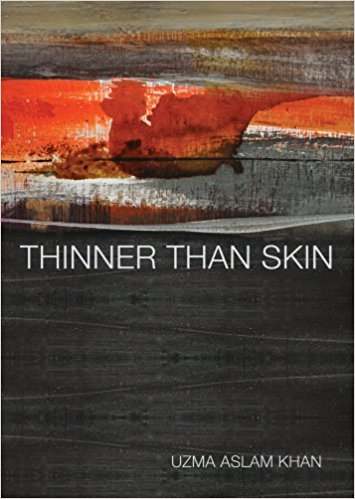 Thinner than Skin, my first engagement with Uzma Aslam Khan’s work has been a beautiful experience. Truly, there is no other word to describe her writing, which is well-researched as well as derived from her personal experiences. The novel, now shortlisted for the Man Asian Literary Prize, takes us on a vivid, kaleidoscopic journey through the mountains of Pakistan. The naked and pristine beauty of nature, where absolutely exquisite descriptions are provided of glaciers mating, where life is simple, in spite of many hurdles, is juxtaposed with the harsh realities of urban life in San Francisco, in spite of its ‘cliffs and cypresses’, where Nadir the protagonist has to work at multiple jobs to make ends meet, where mugging and dacoity are common occurences.

There are three stories interwoven into the narrative of the novel. At one level, there is the story of Nadir and Farhana, two intrinsically opposite souls, as they undertake a journey into the mountainous terrain of Pakistan—the Kaghan region—the northern territories, where Pakistanis, Uzbeks, Russians, Chinese and Afghans come together to trade. They are accompanied in this quest by Nadir’s childhood friend Irfan and Farhana’s friend Wes.

Nadir and Irfan had visited the area once before, accompanied by Irfan’s wife, now dead. For Irfan therefore, the trip has a different resonance. While Nadir is on the trip to revisit the country of his childhood to take pictures and fulfil his dream of becoming a successful photographer, his girlfriend Farhana is on a quest of discovering her ‘homeland’, the country of her origin, born as she is of a Pakistani father and a German mother. As she ‘returns’, in the true diasporic sense, she is also on a journey in search of her own identity. In this respect at least, the character of Farhana may be said to have parallels to the author.

The second narrative is of Maryam and her family, her mystery lover and her three children, providing a glimpse into the lives of the native indigeneous nomadic herding communities living amongst the mountains. While these two narratives, written respectively in the first person perspective (Nadir’s) and the third perspectives make up the bulk of the text, there is a disturbing third strand of terrorism. The bomber who is apparently hiding among the mountains is an intruder into this peaceful solitude of nature—and yet he becomes a dominating factor—much like terrorism is today, in Pakistan and worldwide. When the three worlds meet, there is revenge, leading to tragedy and destruction, and nobody’s lives will ever be the same again. However, it is the description of nature that makes the novel truly stand out. The rugged landscape is as much a character in the novel as the humans. There are several insights into the ‘real’ behaviour of the Pakistani people, far removed from the images of violence and danger associated with the country in the West. Uzma Aslam Khan has taken great pains to provide the reader with a glimpse of Pakistan that is rarely seen, far removed from the stereotypical images usually seen. This contrast is clearly brought across in the interaction between Nadir and the publisher in the early part of the novel, when the latter asks him why he is ‘wasting his (your) time taking photographs of American landscapes when you have material at your own doorstep?’ A little later, the publisher further comments: ‘Show us the dirt. The misery. Don’t waste your time being a nature photographer. Use your advantage.’ Far removed from this stock image of dirt, misery, beggars and filth, which the West is so fond of depicting of the subcontinent, the author concentrates instead on the beauty of the natural environment—the folktale/myth of Nanga Parbat and Parbat, and in perhaps one of the most vividly paragraphs of the novel, the description of the ancient ritual of the mating of the glaciers: The female ice was picked from a village where women were especially beautiful, and because this wasn’t enough, talented….(the male) was picked from another village. One where men were strong, and because this wasn’t enough, successful.

And a few lines later: The porters lowered the ice-bride and ice-groom from off their backs without hurting them. They tossed the male in first. Whooshoo! Whooshoo! A loop of air seemed to dance right back up the hole and circle around again, inside my chest. The female was released on top. She fell without a sound.

These descriptions are interspersed with small, important details, seemingly unrelated to the text, but interesting nonetheless. For example, the legend of the Nain Sukh river, the story of the jinn and the fairy princess, the meaning of the word Maryam—‘the girl who moved the rock’ or even the meaning and etymology of Alcatraz.

An important aspect of Uzma Aslam Khan’s novel is also her strong portrayal of women characters. Both Farhana and Mar-yam, otherwise so different from each other in their upbringing are yet similar in many ways. Both live life on their own terms, and deal with the tragedy that joins them in different ways. The novel opens with Maryam, her musings and her reflections on her life, and it is her desire for revenge that precipitates a lot of the action in the last section of the novel. Farhana on the other hand is seen totally through the lens of Nadir—the way in which he photographs her, or wishes to, her actions, impulsive as they may seem, contain within a strong sense of self-determination. She is simultaneously a native and a foreigner in her own land, which gives her a unique position of being treated as both a host and a guest. And her contrast with Nadir’s sister Sonia, a schoolteacher in Karachi, could not be more pronounced. The title of the novel is also apt and loaded with significance. When Maryam’s daughter asks her if her skin is as thin as that of a goat, she replies that it is actually even thinner! ‘Which meant, of course, that if a goat could be shred so easily, so could a woman.’ She advises her daughter to grow a second thicker skin beneath the thin outer layer, one that must be kept hidden. The novel is like an onion—as one peels off layer after layer, each thicker than the last, to reveal more details, meaning and understanding are enriched with tenderness and lucidity, ultimately exposing ‘the fatal limitations of human understanding.’

However, it is not as though Thinner than Skin is without its drawbacks. The constant repetitions, brought about by the multiple narrative voices, and the back and forth chronicle of accounts from a different perspective affects the pace of the novel. Also, midway through the novel, one realizes that the plot of the novel is not the strongest. Yet what makes it a good read is the macro view that it provides of a world, far removed from that of our urban metropolises, a world which will be a revelation to the western audience used to a certain image of the Indian subcontinent. ‘The novel is a love letter to the wilds of northern Pakistan, to glaciers, to the old Silk Road, and to the nomadic life of the indigenous people.’ In that respect, Uzma Aslam Khan deserves a huge round of applause.