Of Life and Death and All Things Else 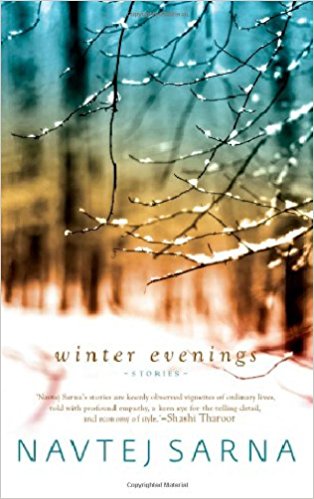 It is a pleasure to hold a book of short stories, flip its pages and discover that each story is actually short, about 4-5 pages. So much has happened in the short story space in the last couple of decades that some read like mini novels while others like flash fiction. Navtej Sarna’s Winter Evenings takes the reader back to the age when short stories were short sans frills. In the good old tradition of short stories most of Sarna’s stories also fulfil the unities of time, action, and space. That is part of the reason they work.

Sarna is an economical writer, in both the subjects he chooses to write about and the way he writes. His stories are based on simple events like a meeting between friends, a phone call from a foreign land, a marriage proposal, a trip to a hill station or the chance discovery of a paint box. The simplicity of the themes is a reason to celebrate the book because the focus is once again on writing and how writing can create its moments. Many writers would seek bigger events to build their stories, believing that the import of the event has to be great but not this one.

Sarna selects simple, almost everyday occurrences and makes stories out of them that play out in the head. For example, It was on a yellow hot afternoon that we went to cremate my grandmother, with the kind of heat that makes you wish fervently under your breath for a death in winter. Nothing, not even grief, makes much sense in that kind of heat, when the roads give off whiffs of steam and the frame of the car window makes red scalding marks on your forearm. A death in winter would be so much more sensible and decorous: the ice under the body would not melt away so fast into meaningless rivulets, the flowers would last a little longer, and it would be altogether more sad.

An opening like that satisfies you. You hope to be carried on by the tempo and Sarna pulls a surprise: shows you how the grandmother was a victim of both Partition and the riots of 1984. That dual tragedy has affected a whole community but it has not been linked and written about. Sarna hints at it and leaves it at that. Not all points need be driven home. The story ‘A Golden Twilight’ reaches a similar effect in drawing the reader’s attention to old age and memory but in a way that relaxes the reader—in the end the aged lady chooses to write poems.

Sarna brings his own experience as a civil servant to bear on his stories. Whether it is in showing how a junior officer starts taking baby steps towards corruption or how a trainee officer files reports on development of remote villages but can’t save a young girl being sold away as a new bride. ‘Madam Kitty’ and ‘Barrier Beach’ are excellent examples of how the real story is really within the head, rooted in our own prejudice. Both deal with how we look at people, in this case prostitutes. ‘Forgotten Tunes’ evokes the class barrier and poverty but does so very visually juxtaposing the harmonium carrying singer amidst a marriage party. ‘A Certain Thing’ is one of the simple yet teasing stories about hunting and accidents. In its rendition and even subject it compares with Hemingway’s ‘Hills Like White Elephants’, both being transparent and yet being mysterious and a bit secretive about what they intend to do. Sarna does reach that kind of level with another story A Saturday Lunch which is about a troubled marriage in which the narrator is the guest at the home of a conflicting couple.

Six of Sarna’s nineteen stories are located in winter though all of them read like the tip of an iceberg. He shows you a little from his window but equips you enough to play with the scenes or characters in your mind long after you have finished reading the story. Whether it is the small house in the hills on a cold evening or the midday ferry or the grandmother or people in crumbling marriages or officer on a foreign travel or the junior in office who faces a corrupt official, each space and character lingers in the mind long after the story is read.

The collection does showcase Sarna’s mastery of the craft of short story. It also carries an appendix that mentions where most of the stories have been published in the last twenty-five years. That is a long time to build a collection and it shows the writer’s patience. If there is to be another collection this reviewer would want to see a bit more raw emotion in the stories. The stories can benefit from drawing a deeper emotional connect with the characters and their conflicts and even being a little politically incorrect.

While most of the stories are well located in real places one wonders about an excellent story like ‘The Masterpiece’ that starts with one of the best opening lines: ‘Last Sunday, I decided to rearrange my books’. To which war does this story belong?

The best part of the stories is that as a writer Sarna avoids the pitfall of judging his characters or their actions. He does not take an explicit stance and shows you how events unravel without his interfering with them. The collection itself is attractively produced. The text is well spread, the stories are in order and the prose is clean and well cut. The editor has taken care in arranging the stories in an order that does not jar with our reading sensibilities. All of these add to the pleasure of holding and reading the book.

Amandeep Sandhu is the author of Sepia Leaves and Roll of Honour (Rupa and Co).