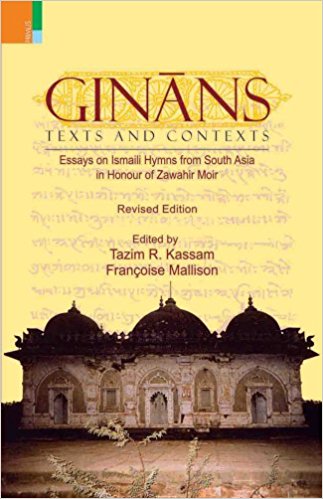 The Satpanth Ismaili Muslims or Khoja Ismailis in India and Pakistan have a remarkable tradition of religious poetry called Ginans which they have sung for several centuries in daily rituals. This small but dynamic Shia community has spread from the subcontinent to other continents without renouncing the practise of singing Ginans. Composed in Indian languages and idiom, the Ginans manifest how surrounding cultures and philosophies influenced Muslims who created new ways of expressing their beliefs and values. This living tradition of religious songs is central to Ismaili practice. However, it remains a less trodden area among researchers. The book under review is the outcome of a Ginan Symposium held in Paris in 2002. This collection of essays on the Ginans by academicians and community enthusiasts is written in honour of Zawahir Moir who is known for her pioneering and scholarly engagements in the field.

The Satpanth Ismailis recognize the Ginan tradition as their devotional sacred texts encompassing a major corpus of hymns composed in the vernacular languages of India, including Urdu, Hindi, Gujarati, Sindhi, Kacchi and Siraiki. The word Ginan (ginana) has originated from the Sanskrit jnana and conveys the meaning of sacred, gnostic knowledge. For a long time, these sacred hymns were merely confined to the initiates of the Satpanth Khoja community. Some members maintained their Hindu affiliations but inwardly observed Satpanth teachings. Since they kept their Ismaili identity hidden(gupta), they were called Guptis. Indeed! This hybridization of religious identity significantly contributed to the sustenance and enhancement of India’s composite culture. The singing of Ginans resembles the devotional Bhakti songs of the upper Indian Sants. Their versicle form and intensity added lustre to the great mystical poetic literature of South Asia.