Exploring Conversion And Its Discontents 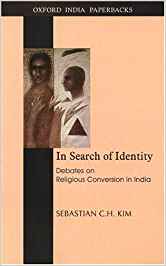 The vital importance of this timely and extremely well-written book cannot be stressed enough. In the surcharged atmosphere characterizing the contemporary discourse on conversion in India, where emotions run high, and where perceptions and prejudices clash with the deafening sound of incomprehensibility, where well-disposed and sensitive-minded people are often overwhelmed by the unfortunate directions which the debate on conversion often takes, Sebastian Kim offers us a sober, carefully researched and painstakingly documented book on the emergence of the conversion issue during the last one hundred and fifty years in pre- and post-independent India.

The book does not shy away from difficult questions—running through it is the reality of the encounter between living and dynamic faiths, with all the prospects and promises that such encounters hold, and with the attendant prejudices, misconceptions and deliberate perversions that such encounters generate.

In addition, the question of power—colonial and nationalist—is also addressed. This work is also important for the careful examination of how the issue of conversion was addressed from a variety of perspectives, defensive and polemical, and for interacting with and interrogating a wide range of the writings and analysis of sociologists, historians, theologians and journalists. Kim notes that the issue has increasingly come into focus in the last couple of years and that the topic is no longer something that can be ignored, since at the very basis of the debate lies the question regarding identity. The “hyphenated” existence of the convert in India is a reality and not an assumption. The increasing “pressure on the hyphen” – pressure from without and within – is an important area to be researched and acknowledged,1 and this book admirably demonstrates how this is to be done.

The book is carefully organized and arranged. Kim begins with an overview of the debates on conversion during the period of the British Raj. This includes a recapitulation of the debates between the Baptist missionaries in Serampore and Raja Ram Mohan Roy, the encounter of the Christian missionaries with Hindu pundits, which took the form of a disputation on religious and theological propositions, and of the evolution of the thinking of M. K. Gandhi on conversion, exemplified by his exchanges with both national (V. S. Azariah) and expatriate (E. Stanley Jones) church leaders. Many of the issues raised at that time continue to be with us today in the same or similar form, and one has the impression that much would be learned by those on both sides of the religious and ideological divide by revisiting these debates and learning from them and from the context in which they were held. Much was said in a spirit of honesty and frankness. Much was said that prepared the ground for suspicion regarding motive and interpretation. Many things said then continue to require answers, or at least ongoing interaction, with a spirit of commitment and openness, without avoiding basic issues of faith and identity, issues sometimes ignored because of polite superficiality. This chapter also problematizes the vexing subject regarding the relationship between mission, conversion and proselytizing. How does one distinguish between these? Are they absolutely inter-related? Can there be mission without conversion or proselytizing without mission?2 How does one evaluate the educational, medical and social activities of the church? Can there be conversion without discontent? How does one interpret the mass movements which were a feature of religious conversion at the turn of the 19th and beginning of the 20th centuries, not to say anything about the mass conversions to Buddhism under Ambedkar in the middle of the 20th century?

The second chapter is a significant one in that it deals with conversion and the emergence of the law of the land by reviewing the debate on conversion in the Constituent Assembly. The question regarding who was representing whom, and who spoke for whom remains important, since the “representative” character of the Christian members of the Assembly remains an issue. How does one define “representative” and in what sense can one be said to represent another? Does ones religious affiliation become the sole criterion or the determining factor by which one is characterized in a constitutional body such as the Constituent Assembly? This debate remains crucial since the spate of “anti-conversion” bills passed by various State Assemblies have had to make reference to how these debates played out and were interpreted.

Kim moves on to analyse how the independent government of India dealt with the issue of the ongoing missionary activities in India. This, again, is a significant section, since the issue regarding “freedom” of religion became a catchword through these discussions. The Niyogi Report and responses to it receives detailed treatment, as well as analysis of the subsequent legislation by various states of the Indian union. This section discusses how in a professedly “secular” set-up, the role of religion, and the role of the state in legislating religious activities, became the focus of debate, discussion, controversy, and the arena where the discourse on human rights and human wrongs came to the fore.

The book, however, does not remain at the level of listing, discussing and analysing what went on between religious groups and between the government and the people. Kim has an important section dealing with the intra- Christian debates. This area is probably the least explored by concerned Indian analysts. How did some of the theologians, leaders and thinkers of the Protestant and Catholic church react to the issues of the day? The views of important Indian and missionary thinkers are admirably and clearly presented, including accounts of the debates between historians like Kaj Baago (Professor at the United Theological College in Bangalore and later Danish Ambassador to India), Bishop Lesslie Newbigin, one of the giants of the ecumenical movement of the twentieth century and M. M. Thomas, the outstanding lay-theologian, who capped an unbelievable career by becoming the Governor of Nagaland. How was the figure of Christ to be understood? Could there be commitment to him outside the boundaries of the church? Could there develop a secular witness to Christ in a pluralist society? How was the sacrament of baptism to be understood—as separation or incorporation? How was the desire of the Vatican for the evangelization of Asia to be understood? What about the reality of on-going mass-conversion?

Kim next explores the ramifications of the debate provoked by the writings of Arun Shourie, especially by the publication of his books Missionaries in India (1994) and Harvesting our Souls (2000). On the one hand, the super-claims of conservative Christian agencies about the billion “unsaved souls” were no longer an in-house matter. Thanks to modern communication technologies and the use of the Internet, the claims and publications of such groups were available for scrutiny and analysis, on the other hand, the concern for dialogue, exemplified by theologians like Stanley J. Samartha (also a Professor at the United Theological College and later the first Director of the ‘Dialogue with People of Living Faiths and Ideologies’ sub-unit of the World Council of Churches), author of The Hindu Response to the Unbound Christ (1974) and One Christ – Many Religions: Towards a Revised Christology (1991) (the second book surprisingly not considered by Kim). Suspicions were no longer just that—the documentation for such suspicions was there. At this point was it helpful to try to distinguish between different groups and sub-groups? Understanding the reality that the Christians in India belonged to Orthodox, Catholic, Protestant and Pentecostal churches was one thing, but dealing with the increasing proliferation of sub-groups, with distinctive theologies and practices, not to say anything about funding realities, under these broad categories, was another. Who spoke for whom and how? The role of bodies like the Catholic Bishops Conference of India and the National Council of Churches in India were increasingly under scrutiny. It is in this context that the progressively more vocal role of the Sangh Parivar in the last few years has to be understood. There have been important meetings held at the local and at the national levels, but the debate goes on. Given the reality of the foundational basis of some of the organizations which form the core of the Sangh Parivar, it is hardly surprising that the debates have circled around the issues of nationalism and identity, commitment and conversion, citizenship and minority rights—hence the crucial importance of the main title of the book—In Search of Identity.

Kim concludes his book by providing a basis for the ongoing interaction between Hinduism and Christianity, where the right to be different and the right to believe has to be held together with the right to co-exist in a religiously pluralistic society. Respect for, and the acknowledgement of, the difference between the ways of life, including the goals and purposes, of the great religions is an urgent and pressing need.

The conclusion of an important book (listed by Kim in his impressive Bibliography) has this to say: Conversion is paradoxical. It is elusive. It is inclusive. It destroys and it saves. Conversion is sudden and it is gradual. It is created totally by the action of God, and it is created totally by the action of humans. Conversion is personal and communal, private and public. It is both passive and active. It is a retreat from the world. It is a resolution of conflict and an empowerment to go into the world and to confront, if not create, conflict. Conversion is an event and a process. It is an ending and a beginning. It is final and open-ended. Conversion leaves us devastated—and transformed.3

If this is so, then the book under review offers us a fine basis to continue the exploration of conversion and its discontents.

Jayakiran Sebastian is a Presbyter of the Church of South India, and Professor in the Department of Theology and Ethics, at the United Theological College, Bangalore. Currently he is a Member at the Center of Theological Inquiry, Princeton, NJ, USA.