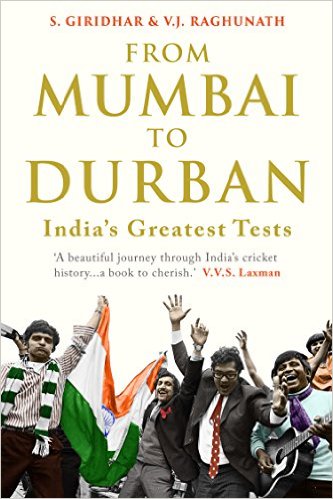 Books on cricket generally fall into one of two categories: those that focus on the field of play and those that set the sport in its wider social and political context. S. Giridhar and V.J. Raghunath’s book, From Mumbai to Durban: India’s Greatest Tests, belongs to the first category. The book is a highlights package of the greatest victories and near-wins in India’s career as a test match-playing nation. This is history as chronicle, a celebration of the heroic exploits of India’s cricketers from 1947 to 2010.

The authors frame their selection of great test matches within a four-fold periodization of Indian cricket history since Independence. The first period roughly covers the first quarter of a century after 1947. In these years, test victories were rarities, their occurrence an occasion for national rejoicing.

The occasional flash of individual brilliance only served to place in sharp relief the general failure to cohere as an effective sporting unit. A new phase in Indian cricket history began in 1971, with the emergence of Sunil Gavaskar and Gundappa Viswanath as the mainstays of the Indian batting line-up and the flowering of the famed spin quartet. In the third period, running from the 1980s to the end of the 1990s, Indian test teams acquired a reputation for being tough opponents at home but remained pushovers abroad. That reputation was corrected to a great extent in the first decade of the new millennium, which the authors identify as the fourth phase in their narrative. The Indian cricket team, buoyed by the batting exploits of a gifted set of batsmen and imbued with a new sense of team spirit, now began to win matches in testing overseas conditions.

Viewed through the frame of test matches, this chronological break-up of India’s cricketing history is unexceptionable. Moreover, few readers are likely to quibble with the authors’ choices. Their list of twenty-eight great test matches includes, among others, the much cherished overseas triumphs: Trinidad, 1971; the Oval, 1971; Trinidad, 1976; Melbourne, 1981; Lord’s, 1986; Leeds, 2002; Adelaide, 2003; Multan, 2004; Johannesburg, 2006; Nottingham, 2007; Perth, 2008; Galle, 2008; and Durban, 2010. Many of the memorable domestic victories are here too: Kanpur, 1959; Bombay, 1964; Calcutta, 1974–75; Ahmedabad, 1996; Chennai, 1998; Kolkata, 2001; Chennai, 2008; and Mohali, 2010. Equally, the authors also consider test matches that did not yield an outcome but nonetheless become part of the game’s Indian folklore: the Gavaskar-led run chase that fell tantalizingly short at the Oval in 1979; the one spearheaded by Dilip Vengsarkar later that winter against Pakistan at Delhi; and Sachin Tendulkar’s failure to see India home against the same opponents at Chennai two decades later.

The authors do a brisk job of narrating the story of each match. But they adhere to a fixed format in every chapter: a detailed account of the sequence of events interspersed with newspaper accounts and oral testimonies of one or two participants. Fortunately, the brevity of the chapters offsets any tedium induced by this unvarying narrative strategy. And to this reader, at least, the principal charm of this book lay in the memories it triggered: both of the matches themselves and the different settings in which one watched or followed them.

Ironically, although this is a book about test cricket, it is infused with the spirit of the game’s newest version. As in T20 cricket, the emphasis is on the ‘big hits’. And while this has its charms, it does tend to drain cricket of the rich diversity represented by the dull draws and agonizing defeats. To be fair to the authors, they do make room for some test matches that were captivating despite yielding no result: the ‘tied test’ featuring Australia at Chennai in 1986; the thwarted victory against the West Indies at Bombay in 1949; and the tantalizing quest for a win after following-on against the Kiwis at the Brabourne in 1965. On the whole, however, it is the sporting victories that the book seeks to highlight.

Equally, it is worth pondering the fact that test matches have increasingly registered less of an impact on the social history of Indian cricket than the famous triumphs in the limited-overs format. Arguably, the World Cup final at Lord’s in 1983 and the World Championship of Cricket at the MCG in 1985 transformed the game more decisively than any of the test matches that are described here. And far more than India’s growing ability to win test matches abroad, it was the Indian craze for T20 cricket and the birth of the IPL that was the real story of the last decade. Inevitably, then, one is reminded of CLR James’s oft-cited remark: What do they know of cricket who only cricket know?

Prashant Kidambi is Associate Professor in Colonial Urban History at the University of Leicester, United Kingdom.