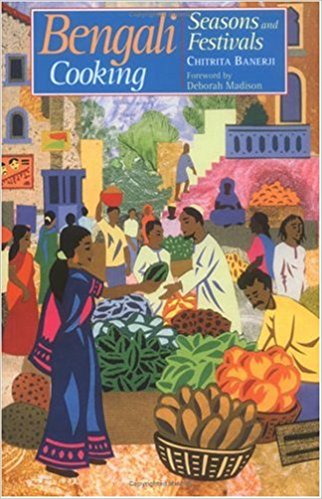 Bengali Cooking: Seasons and Festivals is a reprint of Chitrita Banerji’s original work, Life and Food in Bengal, published in 1991, abridged and republished with the current title in 1997. Given that the book was written and published decades before food writing became en vogue in India, it was clearly way ahead of its times. It is only fitting that this gem of a book be resurrected for current and future generations of readers and food enthusiasts.

The book follows the cuisine of Bengal—both West Bengal and erstwhile East Bengal or Bangladesh—over the four seasons of the Hindu calendar, beginning with spring, the traditional new year for several cultures across India and the world, the book winds through the streets and highways of summer, monsoon, autumn and winter. Before hipsters made seasonal eating cool, there was the traditional logic of eating according to seasonally available food. This logic has been brought to bear upon the text.

It would probably be a disservice to restrict this book to the category of food books though, since it is a personal memoir. The author’s life, family and friends are central to the writing. She gleans much from the traditions in her own devoutly Hindu household, as well as from her Bangladeshi husband’s Muslim household. Then there are the friends, the cooks, the domestic help, all of whom have a strong presence. It is also a book about the culture of Bengal. Banerji discusses gastronomic habits and connects them to cultures and rituals of Bengal. Her insights are full of diversity. She frequently weaves the urban and the rural, the rich and poor, Hindus and Muslims, and East Bengalis and West Bengalis in a tapestry. Her breezy language, combined with scholarly erudition, must be held up as an example of the finest writing.

Banerji explains the basics of several well known aspects of Bengali culture and cuisine that are often taken for granted. These include myths of origin and rituals, and several pages devoted to the staple fish and rice. However, her work also brings out aspects of culinary cultures that are less understood. One such aspect is the rich and varied vegetarian cuisine of Bengal. The book highlights the use of non-meat products in everyday cooking. The food is simple, relatively low on spices, does not use the pungent staples of onion and garlic—a clear Vaishnavite influence. Cooking techniques however, remain detailed and complex. The same can be said for the non-vegetarian cuisine influenced by Muslim rulers of Bengal. Keenly adopted by Hindus and Muslims on both sides of the border, the meat laden dishes are rich and spicy. There is also the matter of the influence of South East Asian ingredients and techniques on popular dishes such as prawn in coconut curry.

The most enjoyable part of the book though are the recipes. Instead of giving the recipes separately, the author has made them part of the main text. This is a technique that can now be frequently seen in other food writings. The recipes are traditional, but Banerji explains variation by region and household, and makes them very flexible. She helpfully provides replacement product suggestions for the Bengali diaspora. She also puts into words an unassailable fact that every Bengali understands—that Bengali cuisine is not very amenable to commercialization. This is a cuisine that is best cooked and eaten at home. Although Bengali food has in the past few years become enough of a fad to get some restaurants up and running, this has often come at the cost of compromise on techniques and flavours. For those keen on taking up Bengali cooking on it’s own terms, this is the perfect book to enrich yourselves with.