Of Mayhem And Serenity 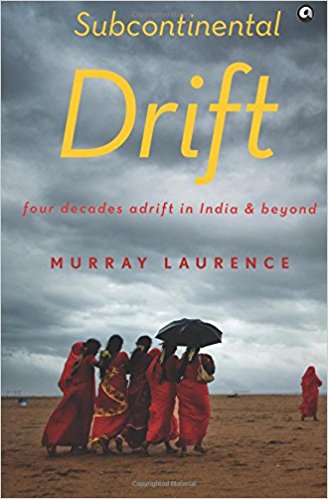 Murray Laurence’s Subcontinental Drift begins with wide-eyed observations on his first journeys in India as a callow backpacker in the 1970s, enthralled and baffled by the incomprehensibility of the country and its people. Forty years later, in the twenty-first century, he is still trying to make sense of the sub-continent’s diverse histories and cultures, but in a more pensive and introspective mood. Primarily a compilation of his writings over the years while drifting through India, the book also carries accounts of travels in China and Southeast Asia, including comic asides about trying to do business in the initial flush of globalization.

Although he had read up on Indian politics and history, nothing had prepared him for India, so to speak. What preparation could there be, he wonders, ‘for the surpassing weirdness of a place where stark naked men with skewers through their cheeks and coals glowing in their grimy matted hair came and joined us at a street stall, and nobody thought anything of it? Or, keeping to the theme, a place where the then Prime Minister, Indira Gandhi, could attend a serious meeting with half a dozen completely naked Jain worthies?’

In the days before Lonely Planet, travel knowledge was garnered through chance encounters on the road or at vermin-ridden lodges and sleazy eateries. Like many of his generation, Laurence’s early meanderings were unstructured and seemingly aimless, decided on a whim by travelling acquaintances or by the money remaining in his wallet. Predictably, he finds himself in ridiculous, horrendous and hilarious situations, which he describes with a panache that has shades of Evelyn Waugh and Bruce Chatwin.

Backpacking then was an adventure, he says. Everything was haphazard, because there was no straightforward or consistent information, but ‘we didn’t care because that was what travelling was about. There was often nothing to do … we were free to think, watch and wander.’

Accounts of adventures on the Indian railways are legion, but Laurence’s escapades have been described as ‘crazier and more generous than the grumpy Theroux’. Descriptions of excruciating encounters with officials and touts to procure seats, ‘the saturnalian free-for-all’ that accompanies arrival of a train, the discomfiting curiosity and camaraderie displayed by fellow travellers, and the ‘sudden generosity of Indians which reveals itself in some of the most surprising circumstances’, can be found in many a travelogue; but Laurence adds a droll and self-deprecatory freshness to his misadventures. Some of his experiences test the imagination, for instance: the train that got lost on a branch line and didn’t reappear for two days; the Jodhpur Night Mail for which he waited hours before realizing that it was non-existent: ‘“If it isn’t coming why are we waiting for it?” “For when it won’t come, of course.”’

On his first visit to Pondicherry in 1974 Laurence meets ‘a pride of eccentric and superior Indian men who spoke down to us in an odd sort of French’, and seems pleased to note on a later trip that the Frenchness has deserted them. The food at the ashram, however, is changelessly unappetizing. In the ‘admonitory boarding school atmosphere’ that the ashram imparts to the town, he derives vicarious joy in witnessing ‘the most hilarious, anarchic farrago of a fete that I’ve ever been fortunate enough to experience’.

As one of the few tourists in the Mahabalipuram of the seventies, Laurence attracts disproportionate attention from hopeful tourist guides. At the High Court of Madras he is assailed by a language that he discovers is English spiced with a legal argot ‘as arcane as you would hear in London’s Inner Temple’. Three decades on he continues to be fascinated by southern India and wonders why its fabulous cultural centres have not been brought to life in the way William Dalrymple has illuminated civilizations of the north.

Laurence describes Hampi as ‘the most stunning site I have seen in Asia’. He tries to imagine the experiences its inhabitants might have had through its creation, growth and devastation. What was it like to abandon their splendid city and flee into the bleak surrounding plains? In similar vein, he wonders what might have gone through the minds of the successive generations of ill-starred women of Chittor who destroyed themselves in their thousands to thwart invading armies.

Off the frequented track, the arid interiors of Karnataka reveal to him the relatively unknown but fertile civilizations that existed in this region over a span of more than two millennia, leaving a wealth of evocative lore and magnificent architecture: the Hindu cultural centres of Belur, Halebid, Pattadakal and Aihole, to the Muslim-dominated cities of Bidar, Gulbarga and Bijapur (the so-called Agra of the south).

Bidar, which Laurence finds strangely alluring, confirms what he terms ‘the puzzle of India’. Here, like everywhere in India, magnificent forts, tombs, mosques, palaces and gardens lie abandoned and in disrepair, surrounded by cities in a state of on-going ruination. He exclaims in dismay that ‘the skills, patience, artistry and vision, and civic order, that created “the wonder that was India” are nowhere in evidence, obliterated by the combined frenzies of modernity and population and the incandescent eruptions of politics, religion, regionalism and caste.’

No western traveller fails to notice Indians’ curious relationship with dirt. Laurence recalls an educated co-passenger on a train shoving assorted trash out of the window saying, ‘I know you people don’t do this, but here someone will clean it up’: a remark that captures the monumental challenge to programmes hoping for a ‘clean India’.

Laurence’s later travels in India are as a business delegate rather than a foot-loose backpacker. Older and wiser, and travelling in a slightly greater degree of comfort, he is nonetheless unprepared, even on his tenth visit, for the ‘extravagant mayhem, the riot of colours and colourful riots’ of Varanasi. But while it was the colour and vigour that once entranced him, after ‘four decades of wonder’ that India has given him, ‘now it is the serenity and abandonment of its most desolate ruins’.

Govindan Nair is a former IAS officer based in Chennai.