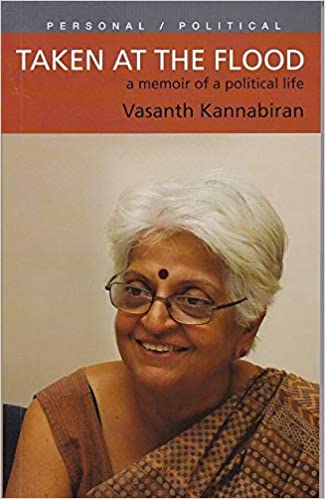 A Feminist Memoir
Kamakshi Balasubramanian
TAKEN AT THE FLOOD: A MEMOIR OF A POLITICAL LIFE by Vasanth Kannabiran Women Unlimited (An Associate of Kali for Women), 2020, 184 pp., 375.00
August 2020, volume 44, No 8

Vasanth Kannabiran’s latest book, described in this edition’s back cover as ‘a feminist memoir’, is a great deal more. There are at least three major narrative strands in the book: (1) Central to it is Vasanth’s examination of her evolution from a conventionally married, well-educated woman into a feminist and peace activist; (2) there is the documentation of a powerful civil liberties movement in the then State of Andhra Pradesh, which in some ways has been a torch bearer for civil liberties and human rights in India as a whole; and (3) there is the gripping story of the love of a woman for a man, which rang in my ears like an ode to love itself.

In this story of Vasanth’s personal evolution, we read of her growth through various vignettes—of a little chatterbox of a girl with her pious Christian neighbours, of the early years of her marriage to a ‘briefless barrister’, and of the turn when their ‘lives were catapulted from the middle-class dream of a tidy house, a scooter perhaps, a film and ice cream for the children on Sundays, onto a completely different plane.’

‘Catapulting’ is a singularly apt metaphor for the incredible destiny that awaited Vasanth as her public life overtook her personal. The key factor in Vasanth’s personality, her strongest personal quality, is her extraordinary skill as a communicator—of emotional truths as well as abstract theoretical concepts in everyday language. Again and again, we read about her growth as an effective public speaker, as a writer of pamphlets, news reports, articles, and essays, and as an interviewer of ‘invisible’ people, and as a fact finder in troubled times.