Keeping Faith with A Charter for Human Dignity 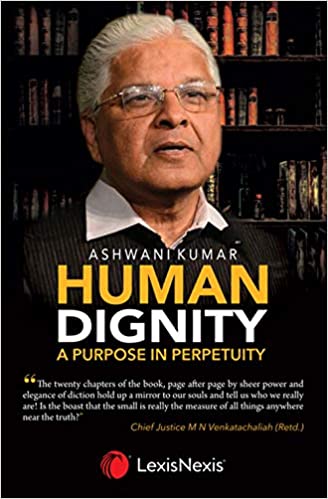 Ashwani Kumar, lawyer and veteran of the Rajya Sabha for fourteen consecutive years, has contributed several articles over the years to the Tribune, the Indian Express and The Hindu. This new book is a collection of essays on a wide range of issues of contemporary concern. It is a fast-paced, fairly slim volume of twenty chapters, packed with three separate sets of full-colour photo plates. The photos are a delight, featuring the author with a veritable who’s who of global and Indian policy makers and judiciary (ranging from several Chief Justices of India to the Secretary General of the United Nations, from India’s own political and executive leadership to the Presidents and Prime Ministers of China, Japan, the UK, France, Israel, South Africa, the USA, and so on), all serving to clue the reader in to just how the subjects covered within the chapters have long been the substantive material for Kumar’s dynamic international advocacy and lobbying efforts.

The twenty chapters are divided into three main parts: the first part is titled ‘Embracing a Politics of Dignity’; the second, ‘In Quest of Freedom, Dignity and Justice’. The third ‘Diplomacy at Work’ presents a snapshot of actual diplomatic issues of current international concern (e.g., chapter 19 discusses the India-UK engagement post-Brexit, or chapter 20 assesses India today in terms of the global architecture of power); however, it is the first two parts that form the heart of the book, revealing its normative core. And the fundamental or grounding norm, the guiding thread, is always the championing of human dignity.

It is through the lens of dignity that the author scrutinizes current politics, policy, and judicial pronouncement. In the first part, in its eight chapters, Kumar turns his gaze toward the Supreme Court’s long-awaited Ayodhya Verdict, the suspension of Article 370—with a haunting reminder that ‘history beckons us to accept that those who feel robbed of their dignity cannot be tamed forever by a muscular state’ (p. 26)—the 2019 Lok Sabha elections, the apparent decline of our public institutions, the leadership problems plaguing the Indian National Congress, and the Puttaswamy privacy decision of the apex court—all, again, encouraging us to ‘embrace a politics of dignity’.