A Century of Satyajit Ray 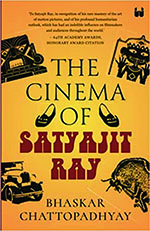 The birth centenary of Satyajit Ray (1921-1992) has spawned a torrent of activities. Despite governmental indifference, there has been an outpouring of books, journals, articles, exhibitions and the like, by individuals and private institutions on arguably the most creative and composite artist of Independent India. To assess therefore, how Bhaskar Chattopadhyay’s book The Cinema of Satyajit Ray adds value to the substantial literature that already exists, is not an easy task.

Besides Ray’s own writings and the distinguished works of Marie Seaton, Chidananda Dasgupta, Robin Wood, Andrew Robinson, Ben Nyce, Bidyut Sarkar, Gaston Roberge, Darius Cooper, Feroze Rangoonwala, Surabhi Banerjee, Soumitra Chatterjee and others in English, and of numerous authors in Bengali and foreign languages, a few publications during the centenary deserve special attention. Prestigious journals like Frontline (November 5, 2021) and Desh (in Bengali) have brought out special commemorative issues. Kolkata Municipal Corporation has published a compendium in Bengali that is both imaginative and rich in content.

Robinson’s biography is perhaps the most definitive and comprehensive text on Ray so far, meant for a global readership. The revised version adds an Epilogue titled A Century of Ray and an Appendix in the form of interviews with Ray in the 1980s titled Ray in Conversation. For any serious reader interested in understanding the whole gamut of Ray’s creativity, especially the cinematic, Robinson’s book would serve as an authoritative source book.

Professor Surabhi Banerjee’s book belongs to a different genre. Being a Bengali and a noted scholar in English literature, she has examined Ray’s work, both the cinematic and the literary, from an academic perspective. In the process, she provides an insight that is both critical and novel.