A Scientific Approach to be a Better Muslim 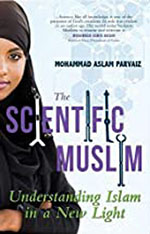 The pandemic unveiled the system’s frailty, the dire need to develop a complementary long-term relationship between humans and the environment, and solutions for the crumbling system. Throughout the centuries, the debate of religion and science has been dominant in the discourse, providing a systematic and lawful way to sustain society. Often, the Qur’an provided examples of many strong ties to knowledge, reflected from both rational and scientific approaches. Mohammad Aslam Parvaiz, trained Botanist editor of Urdu Magazine for three decades, advocates understanding of the Qur’an from a scientific approach in The Scientific Muslim: Understanding Islam in a New Light, questioning the nature and existence of Muslim society, and their disconnect with the meaning and practices of the Qur’an, especially in the context of the environment. It attempts to overcome many misconceptions among the educated young Muslims and inculcate concepts with rationality and logic.

The book is focused on the scientific explanation of environmental degradation in the world, connecting it with Islamic connotations. In the chapter on the epistemology of ‘Muslims and Science’, Parvaiz shows a connection between environment, humans, and science and traces it from a historical point of view. He emphasizes that religion and science complement each other, as the Qur’an helps us and guides us to live in harmony with nature. However, greed and individual self-interest, deceit, envy, lust, and arrogance have created a moral vacuum in the world, specifically within Muslim societies. He states that disorder and corruption are the two significant evils within Muslim societies identified in the Qur’anic verses Surah al Baqarah 2:11 and Surah al Baqarah 2:105 (pp. 54-55).

Environmental degradation is the outcome of the people’s self-centric approach and needs to be rectified as a duty and service to their religion. Parvaiz focuses on gaining knowledge of the universe through three human senses–eyes, ears and thinking heart could constitute and verify knowledge within the scientific approach. Thus, the unification of knowledge and a road map for acquiring scientific and rational knowledge in all spheres would provide humanity service according to the divine order in the Qur’an. Qur’an some 1400 years ago emphasized and discussed the environment, highlighted interconnection, and balance between things in the universe.