Arc of a Fabled Career 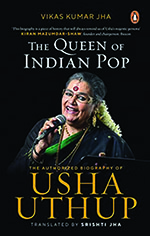 Arc of a Fabled Career
Nehal Ahmed
THE QUEEN OF INDIAN POP: THE AUTHORIZED BIOGRAPHY OF USHA UTHUP by Vikas Kumar Jha. Translated into English from the original Hindi by Srishti Jha Ebury Press/Penguin Books, 2022, 290 pp., 599.00
June 2022, volume 46, No 6

The Queen of Indian Pop: The Authorized Biography of Usha Uthup is a faultless English translation by Srishti Jha of her father Vikas Kumar Jha’s original Ullas Ki Naav in Hindi. Both titles are appropriate for summarizing Usha Uthup’s journey. The book has a distinction in the sense that it has been able to address the conundrum, i.e., losing meaning while translating, that translated works mostly suffer from.

Usha Uthup is a pop vocalist with a lot of energy and a strong emotional quotient, and her name conjures up images of her. This book delves into Usha Uthup’s numerous levels and philosophies. Though she was known for her music, this book will help understand her beyond That. She is an ardent believer in humanity and a highly empathic person. Her philosophy of life makes her do many things such as helping people, creating fusion music and contributing to new ideas of education etc.

Usha Uthup, born in a Tamil family in 1947, studied in Bombay, and then settled in Kolkata (then Calcutta), sings in more than 15 Indian languages and more than eight foreign languages. She started her career while singing in a nightclub in Chennai in 1969 and then in Kolkata at Trincas Bar on Park Street. She also covers the journey of a successful singer from nightclubs to playback singing to acting.

The book has almost minute by minute detail of her life, which is probably why it has spread into twenty-nine chapters. The author goes into great detail about how numerous cultures and languages influenced Utup’s development into a cosmopolitan vocalist who went on to become an international legend. Apart from her relatives, her neighbour Pathan’s family in Bombay were part of her upbringing. For instance, the author mentions the reason behind her command over Hindi and Urdu despite being a Tamilian. ‘She gained a lot from the Pathan family, including her command over Hindi and Urdu.’ She was married to a Malayali who lives in Kolkata and Cochin, so she soon learnt these two languages also.