A Burning Issue or a Burnt Out Issue? 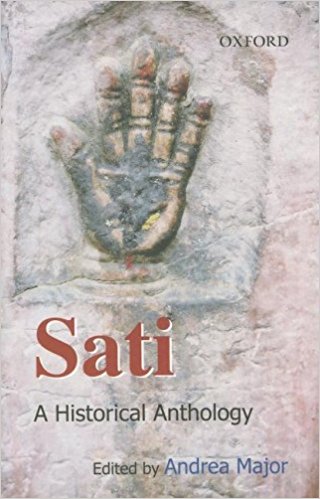 Is sati a burning issue or a burnt out issue? The theme of sati has been thrashed out threadbare in the last decade with both western and Indian scholarship converging on this crucial area of social history and societal practice. Just when one is beginning to feel that one has read and reviewed one too many books on this theme, an incident like that of Roop Kanwar happens and you begin to realize that sati continues to be a burning issue if not in the frequency of its practice than in its serving as a cultural signifier of Indian patriarchy. Andrea Major’s book which has been published this year (2007) in this area needs to be situated within the gamut of recent writings on sati. Following the immolation of Roop Kanwar at Deorala in the Sikar district of Rajasthan on 4th September, 1987, the Economic and Political Weekly came out with a series of articles on sati1 as did the feminist journal Manushi.

Along with the pieces written by social activists and feminists, academic researches into the precept and practice of sati, also began to grow. Proceeding somewhat chronologically in terms of the year of publication, one could perhaps start with J. Stratton Hawley’s Sati: The Blessing and the Curse (Oxford University Press, 1994). Since then very many books have come out on this theme but some of them have attracted more attention than others.