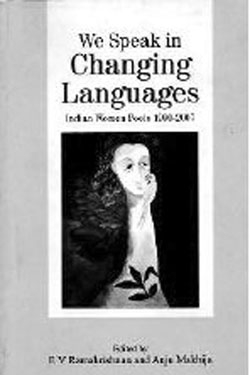 Anthologies serve as signposts in the general trajectories of literary discourse, assimilating changing aesthetic tastes and exerting a vital influence on the future course of literary genres. This anthology of Indian woman poets commissioned as part of the Sahitya Akademi’s effort to showcase Indian English women writers in its golden jubilee year, augurs well for poetry in general and for women poets in particular, as they climb back from the edges of representation in anthologies to claim one for themselves after a gap of twelve years since De Souza’s Nine Indian Women Poets. Moreover the selection has widened to include twenty-one poets extending the corpus of Indian English women poets to include poets from the Northeast and younger poets who have not yet found a place in poetry anthologies. Once again it is poets themselves who have taken up the task of anthology-making. Co-editor Anju Makhija, award-winning author of two volumes of poetry, has modestly excluded herself from this anthology in a departure from the usual tradition.

The anthology once again underscores the vital visibility anthologies provide to poets and the comfortable access for the general reader, since even in a time of rapid information dissemination poetry volumes, especially those by women poets, are hard to come by.

If the earlier anthologies of women’s writing were published with the explicit aim of making women’s voices heard in the malestream, the focus has shifted to the need to display the wealth and complexity of women’s creative output. Instead of feminist/ womanist concerns, the anthology is seen as documenting the ‘diversity of women’s voices in contemporary Indian English poetry’. Indeed the anthology provides a sampling of the heterogeneity of women’s voices and of contemporary thought processes of living poets (except for Revathy Gopal who passed away in 2007) whose themes are wide-ranging- from urban middle-class life to war and communalism. The editors remark, the poets are not ‘unduly self-conscious of being women-poets. Gender is a component in their experiential matrix but it does not exhaust their range of themes.’