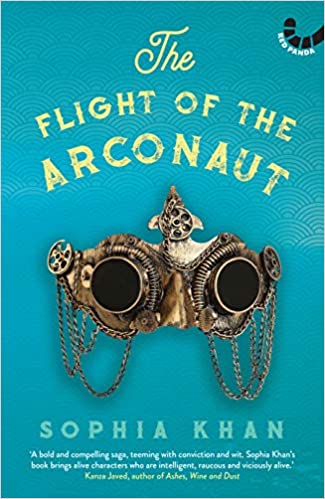 Some of South Asian literature’s most lauded works belong to the fascinating category of Sci-fi/Dystopian Fiction. It already existed even before its so-called definitions came to the forefront. Resurgence and increasing acclaim of western sci-fi fiction like Hunger Games and Atwood’s The Handmaid’s Tale pushed South Asian science fiction to the margins. Nevertheless, this genre is now scaling new heights owing to the concerted efforts of all the writers. Pakistani writers like Usman T Shah, Sami Shah, Shazaf Fatima Haider, and Bina Shah have made notable contributions to the genre. Sophia Khan, the Islamabad based novelist, has significantly added to this category by penning this sci-fi/steampunk/dystopian/post-apocalyptic novel The Flight of the Arconaut. She made her debut with the intriguing coming-of-age tale Yasmin in 2015.

The Flight of the Arconaut is divided into seven books with graphic illustrations by Arapaie Black, is an intricately plotted novel narrating the complex family saga of the Cormorants living in the Atlantean empire. Admiral Arland Cormorant is an influential official of the empire who lives with her wife Ephelia Cormorant, an intelligent and affectionate lady, and his three daughters Amsonia, Azura, and Nyx. The youngest scion, Nyx, is an Eidiki and an expert arconaut adopted by the Cormorants. The familial bliss and peace are disrupted by the Atlanteans and Barbarics’ deadly conflict and the rivals Omar Pendergast and General Cadosi.