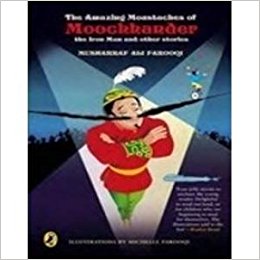 No Title
Shobhana Bhattacharji
THE AMAZING MOUSTACHES OF MOOCHHANDAR THE IRON MAN AND OTHER STORIES by Musharraf Ali Farooqi Puffin Books, 2011, 67 pp., 125
November 2011, volume 35, No 11

The Amazing Moustaches of Moochhandar the Iron Man and Other Stories has four terrific stories. ‘The Giant of the Bakery’ is about Molka the Giant, a fantastic baker. He comes to ‘a nice little town by the sea which is neither too noisy, nor too quite, and had neither too many people, nor too few,’ a perfect little town to start his own bakery. When he first arrives there, he bakes all night and in the morning a mountain of fragrant buns greets the people of the town, ‘There were currant buns and cinnamon buns, iced orange buns and iced apple cinnamon bus, honey-glazed buns and hot cross buns, sesame seed buns and caramel buns.’ The people stare at them, scratch their heads and leave. Molka is confounded. Each night he bakes a mountain of goodies, each morning the people stare and walk away. Until …. But that’s for you to read. ‘Monkeyshines’ is equally good. A cocky little golden haired monkey walks through the town creating mayhem as he runs away with everything from a barber’s clippers to a bride from her wedding reception.

Each episode starts with the monkey saying, ‘O for all I care and for all you and the world and his wife should care’ and ends with ‘Listen, Daddyo!. . .Go figure.’ The formulaic repetition worked well on my five year old granddaughter who giggled at each ‘Listen, Daddyo!’ Imagine my surprise when I came to the end and found it was a translation of an Urdu story. Nowhere does it self consciously draw attention to the original being in Urdu, which for me is the best kind of translation. Musharraf Farooqi’s other brilliant translations include Ghalib Lakhnavi and Abdullah Bilgrami’s The Adventures of Amir Hamza and the first part of Muhammad Ali Jah’s Urdu fantasy, Hoshruba:The Land and the Tilism.