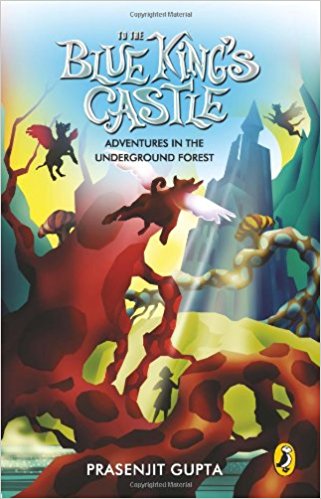 When Ritu goes shopping in an ordinary mall in an ordinary city on an ordinary day and takes a perfectly ordinary elevator to the lowest floor, the last thing she expects is to step out into the Underground Forest. Trapped in this gloomy Forest, Ritu meets the Resident Magician, Serendipitous, and his assistant, Blanc-Noir. They need her help to go to the Blue King’s Castle, for within the castle, locked away in Dodgson’s Box, lies the spirit of Happiness. But the journey is long and the perils many. The road to the Castle leads through the Outcasts Village, past Girnewala Falls, through Mediapolis, through the Bureaucrats’ Maze. (This is from the back cover’s summary) To the Blue King’s Castle was a pleasant introduction to Prasenjit Gupta whom I had not read before. He does not talk down to his readers, which remains a standard of worthwhile writing for children. Unusually for children’s books these days, it is brightly allusive, without being heavy handed. Its premise is an Alice in Wonderland like situation—Ritu sees a white rabbit in the garden section of a mall, pursues it, and falls down a tunnel into an underground forest.

During her wandering in the forest Toto (Wizard of Oz) disappears down a road that appears suddenly. Ritu teams up with an odd set of creatures and head for the Blue King’s Castle to rescue the entire underground world—Oz stuff again. But it is not an imitation. It is freshly imagined without being silly. A car that runs on its passengers’ emotions is a nice if only green thought. There is a Word Doctor, Ph.D., F.R.C.W., Personal Physician to the Fourth President; below that his board reads: ‘All Sorts of Word Remedies, Idioms, Proverbs, Metaphors for every Occasion. Damaged Letters Mended, Broken Syllables Set.’ Diffident about responsibility before she enters the enchanted forest, Ritu learns to take charge of a group, and be decisive. When the adventure is over, she is ready to stand for student council elections so that rather than grumbling about matters, she can try to set them right.