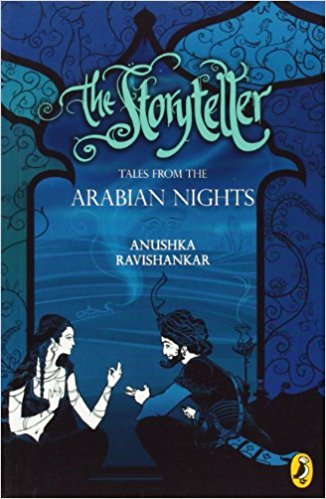 The Storyteller: Tales from the Arabian Nights is a pretty good version of the Arabian Nights for children. It has some of the not so well-known stories in it such as ‘The King and the Physician Douban’ and ‘The Diamond Anklet,’ as well as well known ones, tailored for child readers. The familiar but very long story of Aladdin has been broken into five stories around its distinct episodes. The Ali Baba story is in two parts, in which the women are as smart as Scherazade. Scherazade is coming to the end of the story when her husband, King Schariar, interrupts her:

‘And the story goes that when Marjane got married to Fardeen . . .’

‘What? The servant girl got married to the master’s son?’ asked Schariar. ‘You have a soft corner for servant girls, Scherazade. This is not befitting for a queen.”A person is as a person does, Your Highness. Don’t you think Marjane would be a loyal and clever and bright daughter-in-law? Could Fardeen have done better for himself?’

‘Fardeen was besotted. A man who loves his wife is doomed to disappointment,’ Schariar muttered, but he did not sound convinced at all. ‘Well, go on then, what happened at the wedding?’

When I was young, we usually read individual stories from the Arabian Nights, of Aladdin or Ali Baba. I can’t remember when I realized that the stories were linked via the frame story of Scherazade buying each day of her life with them, but it may have been from Arthur Mee’s Children’s Encyclopaedia which carried ‘Stories from Far and Near.’