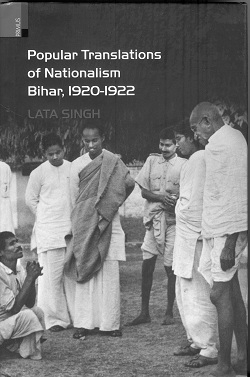 The noncooperation movement was the first mass-based political mobilization on a nationwide scale which involved people from various segments of Indian society. In a sense, it transformed the psyche of the people, trained them in political agitation and made them conscious of their rights. Signi-ficantly enough, the movement attracted con-siderable scholarly notice both in India and abroad. Several of the historians have also studied it at the regional level. The book under review, with its focus on Bihar takes a general look at ‘the nature and character and the com-plexity of popular nationalism’ through the noncooperation movement. In the opening chapter Lata Singh offers a brief account of the land, people, the beginning of modern politics and the articulation of pea-sant struggle in Bihar. In the process of explain-ing these aspects some of the facts that she has presented are incorrect. For example, she has given the date of the battle of Buxar 1760 (p.1) but it was 1764; and that Bihar along with Orissa was separated from Bengal in 1911 but it was on 1 April 1912.

Similarly, she mentions that there was a strong peasant movement in the early 20th century but before the Champa-ran Satyagraha of 1917 there was no such agi-tation. Arvind N. Das, historian of the agrarian unrest in Bihar considers it the first of the series of peasant movements in Bihar.1