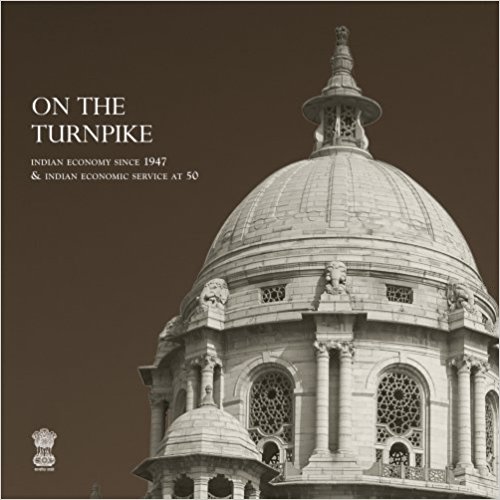 India Shining to India Whining?
Bibek Debroy
ON THE TURNPIKE: INDIAN ECONOMY SINCE 1947 AND INDIAN ECONOMIC SERVICE AT 50 by T.C.A. Srinivasa-Raghavan Ministry of Finance, Government of India and Academic Foundation, 2012, 101 pp., 1500
December 2012, volume 36, No 12

In these days of transparency and disclosure, I should state upfront that T.C.A. Srinivasa-Raghavan is a friend I have known for many years. In Business Standard days, he was also a colleague. He has been a journalist and columnist across a variety of business papers and is widely read. Being a journalist/colum-nist means you produce good copy and don’t churn out turgid prose. Having said this, this is an odd kind of book. On the Turnpike was also an expression used by Vijay Kelkar in one of his widely-quoted papers and dates to a period when people were a bit more bullish about India and its economy. This is an odd book because it is both about the Indian eco-nomy since 1947 and about the Indian Eco-nomic Service (IES) at 50. The longish essay by TCA is on the economy since 1947 and divides evolution into several phases—the age of innocence (1947-57), fiscal Robinhoods (1957-69), path to fiscal indiscretion (1970-79), in search of growth (1980-90) and India rising, but slowly (1991 onwards). That is understandable, but the book has been pub-lished in 2012.

One could argue there has been a different phase since 2004, not very different from Robinhoods of indiscretion.  While TCA’s thumbnail sketch is a very useful and well-written account of the economy’s transition, from North Block’s perspective, I have reason to complain.  First, as a colum-nist, TCA is not known for pulling his pun-ches. In this case, he has, perhaps inevitably because the book was in some sense commis-sioned by Finance Ministry, held back. Se-cond, there will probably be consensus that post-2004 has been different, and not only because of what has happened in the external world. TCA’s essay was originally published in 1998. While it has been updated and revised, it does not reflect the transition from India Shining to India Whining.