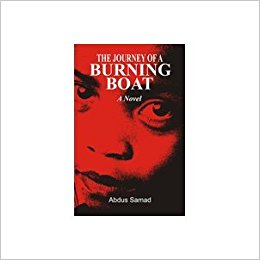 The Journey of a Burning Boat is a work of fiction which sweeps its reader deep into the unrelentingly brutal, inhuman, world of the flesh trade. A subterranean world whose existence everyone is aware of and which manifests itself often in newspaper headlines, only to be forgotten or pushed to the peripheries of our collective consciousness as other more ‘significant’ political and social issues occupy our minds.

Abdus Samad, the author of the novel is a political scientist and Urdu fiction writer whose engagement with the politics of oppression is evident in his earlier works including his first novel Do Gaz Zameen for which he won the Sahitya Akademi award. While his earlier works deal mainly with the politics of rural Bihar several strands and threads from those early novels are picked up in The Journey of a Burning Boat and interwoven in-to a narrative which is not limited to a specific location. Sheila didi, the scandalous daughter of the honest village schoolmaster, whose success is evidently based on her association with the flesh trade, has already made her appearance in an earlier novel Dhamak which dealt with the gang rape of dalit girls in rural Bihar.

But whereas in Dhamak she was an agency for political action, here she is a mysterious black sheep who has prospered in the city by some dubious means and continues to attract curiosity as well as opprobrium in the village. ‘Her looks attract people like bees to a honeycomb. Notoriety and popularity seem her innate, mystic persona, giving her an eminence’ (p. 7).

The story of the young village girl, Chanda, and the world into which she is drawn by Sheila didi is one of a series of vignettes which constitute the narrative. She is one of the girls who often disappear mysteriously from the village. These girls who never come back to their homes just ‘write short notes to their parents, but not too frequently, and without any return address. But these short epistolary exercises are adequate for the parents who receive the money orders. These raise a faint glimmer of hope that the girls are doing well; for they would otherwise have been like albatrosses round the necks of their parents’ (p. 13). In this impoverished world parents see children as just another worry, another mouth to feed, another burden. A common thread which runs through all the stories that follow is the depiction of the depths to which poverty reduces human relationships.

The reader is drawn inexorably into the world of Sheila and others like Chanda and Bunny who have come, like countless other innocents, to the city with the dream of earning something and justifying their existence in the eyes of their parents. Chanda is literally catapulted from the small poverty-stricken world of the village into a glamorous, luxurious and dreamlike existence overseas but she soon comes to understand that ‘To get something in life one has to lose something’ (p. 45). Chanda’s story in a sense holds the episodes of exploitation which follow in parenthesis.

Sheila didi, Kumud and others, who remain nameless, inhabit a topsy-turvy world of inverted values whose denizens can claim quite authoritatively and without any sense of irony that ‘We don’t indulge in any hanky panky. We have some ethics and principles’ (p. 79). But the power and viciousness of this world is revealed by the ease with which it turns the tables neatly on victims like Bunny and her ‘auntie’ who try to escape from it and transforms them into culprits.

However, not all the stories are about dreams which draw impoverished young women to the city in search of a magic wand which will turn them into princesses and queens or at least provide them with a square meal. They are also about the brutalization of humanity and about the loss of innocence. Two callow young men on their first visit to a prostitute are overawed and embarrassed by the confidence of the young prostitute with the soul of a worldy, mature woman. She is a child woman so inured to the sleaziness and moral corruption of her life that she remarks, without any trace of irony, or sorrow, ‘How does it matter whether a woman is forty-two years or twelve? She is used for one purpose only. Some are interested in ripe fruits and others in the in between’ (p. 115). Then there is the ten year old girl who gets voyeuristic pleasure out of spying on the nearly naked young men playing Kabaddi. All her life she has been forced to witness her parents’ nocturnal activities because the entire family sleeps in the same room and when she is scolded by her elder sister she replies, ‘Who have I not seen in an undressed state?’ She wants knowledge but she also wants salvation from her desire for this forbidden knowledge.

Helplessness and poverty almost reduces the victims to an almost non-human level. This is a marketplace and the commo-dities on sale are human beings who are constantly spoken of and dismissed as ‘goods’, as consumables. Young children picked up off the streets, or ‘rescued’ as someone says, and young women from villages are referred to as raw goods which need to be ‘chopped and dressed’ (p. 102). In one of the stories the sheer callousness and inhumanity of the four men who rape an innocent twelve year old is underlined by the repeated use of metaphors of food. The child has no name, she is ‘partridge’, a ‘wonderful dish’ and ironically it is her hunger which the men use to allay her fears and brutalize her. This is a ‘consumer’s world’ we are told with candour (p. 103), a mysterious world where cryptic language and luxurious surroundings hide the sordid ugliness of the trafficking in humans of all shapes and sizes.

Chanda is aware that all the children who have been brought to the nameless foreign country, where she now lives, have burnt their boats. There is no going back for them and they have been brought to this world of luxury merely to satisfy the lust of paedophiles who have completed two-thirds of their lives and need to ‘re-flame’ themselves. In this beautiful island, which contrasts so starkly with the poverty-stricken Third World where the children come from, the buying and selling of humans is merely a business and no one ever speaks of these children as individuals, they have no names, they are just commodities and are discussed in purely commercial terms.

Chanda herself tries to go back home but soon realizes that it is almost impossible to return. She no longer has any place in her parents’ home and their welcome is guarded and wary. Everyone appears happy to see her but their happiness is clearly dependent upon the imminence of her departure. She is the harbinger of wealth and prosperity but no one wants to know where the wealth has come from and at what cost. The story of her life is the journey of a burning boat.

Abdus Samad’s novel is a relentless revelation of the myriad ways in which a helpless human being can be used and abused by those who are stronger than him, by profiteering pragmatists who see the world not in terms of good and evil but in terms of profit and loss. The only note of hope sounds towards the end of the narrative when the ‘contractors’ and agents who have been enriched by the trade in all its ramifications and ghastly variety express their unease at the way the world is changing. Apparently the supply of ‘raw material’, picked up from dense crowded cities where people ‘compete with flies and mosquitoes’, is being seriously affected by the fact that ‘Free education, health care, etc., have begun to sprout. Someone is trying to rehabilitate slum children…’. Despite this glimmer of hope there is very little evidence of any real change in this world of crass exploitation of human beings and what is really chilling is the fact that some of the most horrifying vignettes in the novel are mirrored almost everyday in the headlines of newspapers.