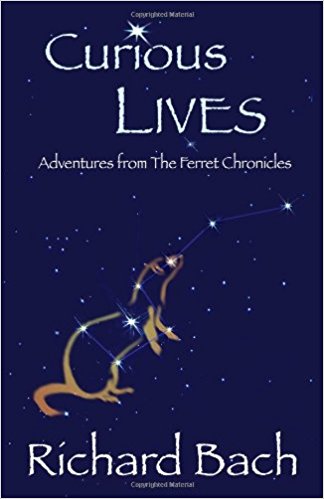 Curious Lives is a collection of five ‘moralistic adventures’, previously and separately published, set in the world of virtuous ferrets. The cover of the book has a pair of bright yellow eyes gleaming from behind dense foliage. It is just the eyes that can be made out and it is just as well. The internet informs us that ferrets are carnivorous mammals that somewhat resemble skunks. But for the purposes of the fables, the ferrets are anthropomorphic, courageous, enterprising, kind, warm and courteous. It is not just the central characters of the fables that are endowed with such moral excellence, but the entire ferret civilization.  The blurb insists that the book can be enjoyed by ‘readers of all ages,’ a claim which at once invites greater scrutiny than one would normally reserve. Also, a word about the author Richard Bach, best known for having written Jonathan Livingston Seagull. His works have a dedicated following for their metaphysical leanings, but are also panned in some quarters for being flaky and light-weight. In the blurb, a tag that attempting to classify the work also seems to have been caught in two minds. ‘Self Help/ Fiction’ it declares. Needless to say, Bach and his works have tended to divide opinion among readers.Titled eponymously, each story in the collection begins with a small parable which serves as a kind of a primer, laying out the central tenet of the following tale, while also revealing some aspect of the ferret way of life. ‘Shamrock,’ the first tale in the collection, begins with the young ferret amazing her audience by cracking ‘The Case of the Midnight Patterns.’ We see how Shamrock begins her journey from being an inquisitive kid to a sharp detective, a role she is destined for. At critical moments, both during her childhood and during puzzling cases, she is guided to the right path, whether by intuition or destiny or another shadowy presence. The mystery with which the story begins is resolved only in part, and as Shamrock follows it deeper, it leads her to the greatest mystery of the ferret world, that of their origins.