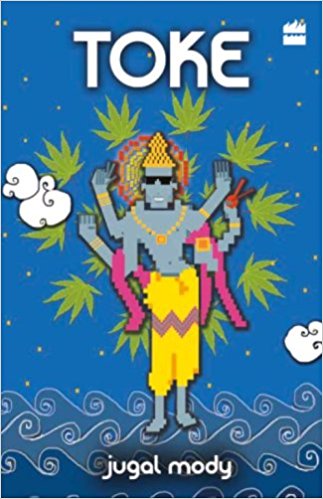 Toke means puffing a pipe or pot filled with marijuana. And true to its title, you get high with the novel’s surreal plot. The story is set in motion as you are introduced to Nikhil the protagonist who is fighting to come out of ganja-induced hallucinatory dreams. He is a regular guy with a regular job and suffers from regular bouts of insecurity, jealousy and disillusionment. Toking is his only escape from his not-so-interesting quotidian life. One day when he is in the middle of a cannabis induced hallucination, Lord Vishnu, the preserver God from the Hindu Trinity, makes an appearance and joins Nikhil and his friends in a session of pot smoking. In between, he tells Nikhil the world is going to end in the next 72 hours and Lord Vishnu has no time for another incarnation to save the world. So, he entrusts Nikhil with the responsibility of saving humanity from total destruction. He warns Nikhil that if Lord Shiva, the destroyer and reproducer of the Trinity, comes to know about the imminent extinction of the human race, he will be more than happy to destroy this world Himself and then to rebuild it.

Nikhil first thinks it is some sort of joke from that strange person who is wearing a dress like the gods from the mythological serials. But, soon he realizes that it is really that Lord Vishnu and the demons have already unleashed mysterious maggots to transform every single human being into zombies. He accepts the challenge and sets out with his friends to save humanity.

What is special about this book is the inventiveness of its narrative structure. Plus, the clever use of language makes this book highly readable. The dialogues sound real and give you an insight into the lingo of generation X. The story becomes confusing at times but the plot unravels once you progress further. Jugal Mody might not be applauded for the literary merits of his debut book by the critics but will certainly get thumbs up from his readers for writing such a fantastical and fun filled book.