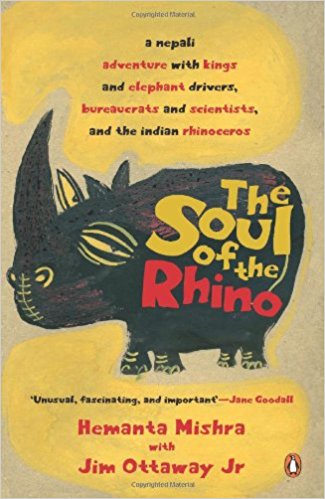 Awork of non fiction, the book highlights one man’s courageous and sometimes frus-trating but always enduring struggle against politicians. He is often confronted by apathy in his quest to help protect the rhino. But he also enjoys small victories and help and support from unexpected quarters.

Hemanta Mishra was the man who helped create the Chitwan National Park. The book spans the author’s journey of three decades that is still far from over. Moving and tough, and at times brutal, just like the animal, this is a book for the almost adult upwards.

The Soul of the Rhino is a story that highlights Mishra’s love and passion to protect and nurture the great one-horned rhino, amidst chaotic politics and conservative attitudes to conservation! It is also a well documented and fitting self tribute to the author’s life, his perseverance and how it changed Nepal’s wildlife conservation strategy

The author conservationist, though educated in the West, hails and works in a developing nation. This offers an interesting commentary and insight into a developing nation’s attitude, priorities and perspectives on animal conservation. The milieu is filled with cultural and political references from Nepal’s more recent history.

Conservation is as much about managing animals as it is about managing the people around. The book is thus not clinical in its records, it shows soul, warmth and concern in the way the author talks of the friendships and helpers such as Tapsi, an elephant trainer and some corrupt and some correct politicians.

Here is an oft quoted piece from the book:
‘For me, the greatest challenge for conservation in Chitwan was linking human welfare to saving the rhino. Though my methods to face these challenges changed, my mission remained the same for three decades. How was I to help rhinos and humans live as good neighbors? How was I to make a live rhino worth more than a dead one? How was I to develop schemes that provided direct economic benefits to the local people?’

The book was first published in 2006 but Penguin has published it more recently here, in 2012. Ideal for the older young adult reader and above.