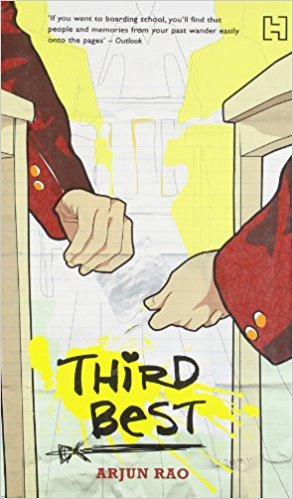 Nirvan Shrivatsava steps into Shore Mount, a posh residential school, with the weight of his lineage on his young shoulders. Three generations of Shrivatsavas, including his parents and older brother, have been stars at the same school and Nirvan is uneasy with his legacy. Third Best is a coming of age novel that traces Nirvan’s life from Class VII to Class XII—from being a bullied junior to a respected senior. Though much of the episodic plot courses along expected lines, Arjun Rao scores with his realistic portrayal of young people—the way they talk, behave, react and respond. And make out, too. Rao makes no bones about adolescents exploring their sexuality and it is a relief to read a book for young people that is not judgmental or moralistic about a very natural part of growing up.

Nirvan, along with his friends, the handsome Faraz and the bumbling Gautam, work their way through this system, falling, failing, and yet managing to keep their heads above the water.

Nirvan’s housemaster and English teacher, Gomez, is his go-to-guy, the mentor who fixes things up and roots for him when the chips are down. Though Gomez is supposed to be a maverick, the character turns into a cliché and one is quite tired of his suavity and endless SA by the time the book comes to an end. Zoya, the hot drama teacher and army wife who has an affair because of her loneliness, is rather run-of-the-mill, too, adding to the popular belief that army wives in general are sex-starved beings.

The female characters in the book do little other than looking hot (in skirts) and spouting bitchy (and supposedly sexy) one-liners. Even Nirvan’s love interest, Ruma, does not escape this treatment. While there are pages and pages about what the boys of Shore Mount do—the games they play, the codes they honour, the friends they make—there is precious little about how the other half lives in the school. Other than passing the boys by in giggling groups, that is. Even in Nirvan’s moment of greatest triumph, when the Headmaster awards him a much coveted honour, there is no mention of Ruma’s reactions though she is supposedly Nirvan’s girlfriend by then. However, Rao redeems himself once again by his non-judgmental approach towards the young. While Nirvan and Ruma are of the Romeo and Juliet variety, there is the other pair—Gautam and Natasha—who are equally in love but willing to consider the possibility that they might break up, even though they’ve gone physical. Rao does not make one kind of love seem superior to the other and that is indeed refreshing.

Third Best deals with many issues, ones to do with growing up and otherwise—sibling rivalry, death of a parent, estranged families, love, academic pressure and many more. Its characters have heart and the intended audience is sure to be familiar with the language that they speak. Nirvan Shrivatsava may belong to the uber-rich, urban social class but his growing up pains are bound to resonate with any average adolescent boy in India.

Sowmya Rajendran is a children’s writer based in Pune. She is not very fond of writing ‘About Me’ sections.