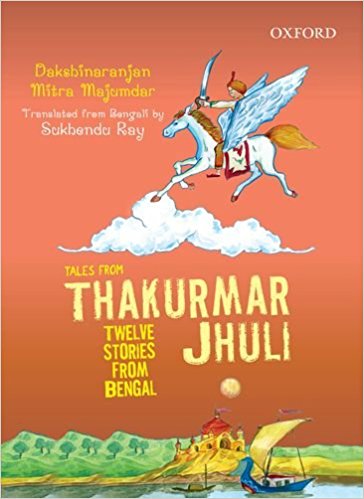 The moment I read ‘Arun, Barun, Kironmala’, ‘Sukhu and Dukhu’ and ‘Saat Bhai Champa’ I had regressed to being a wide eyed seven year old listening breathlessly to my maternal grandmother, my Didima, weaving her magic around a Bengali rupkatha. She knew every story of Dakshinaranjan’s Thakurmar Jhuli (grandmother’s bag of stories) and narrated them with superlative drama. So I am one of those fortunate people who grew up with a storytelling grandma though, technically speaking, she was not my thakurma. Bossy, paan chewing thakurma, my paternal grandmother, was much too pragmatic to fill my head with fantasy, she taught me feminism instead. Dakshinaranjan Mitra Majumdar (1877-1957) was among the most popular and prolific writers for children in early twentieth century. His collection Thakurmar Jhuli has been in print since it was first published in 1907. He specialized in folk tales and what made this book so readable was his voice. At a time when Bangla was still written with a heavy dose of Sanskritized words, he wrote in an easy going, colloquial Bengali and packed the stories with catchy rhymes. I can still recite the ‘saat bhai champa‘ rhyme and the one the fox sang as he was hurt by a thorn of the brinjal plant, which is a sort of ‘oof! ouch!’ poem.

In an excellent introduction Bharati Ray writes that these stories were called rupkatha or imaginative tales that is derived from aparup katha or wonderful tales. ‘It is translated into English as “fairy tales” though that does not signify its true description. There are no fairies, at least not many (not even one in the book under consideration)… primarily, however rupkathas belong to the genre of folk tales.’