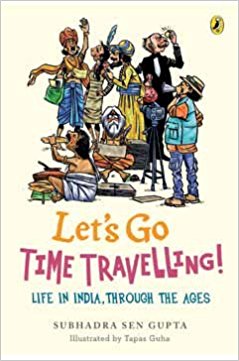 The indefatigable Subhadra Sen Gupta! All children from eight to eighty (this phrase was made famous by Satyajit Ray) must be her fans. No one has done more to make history accessible and as much fun as her numerous books on the nationalist movement and leaders testify. Her latest grapples with the broad sweep of Indian civilization from Harappa to British rule and it is lucid and a delightful read.

This slim book is divided into four chapters: Early India on Harappans and Indo-Aryans, Ancient India on Mauryas, Guptas, Pallavas and Cholas, Medieval India on the Sultanate and Mughals and British India. By focussing on the broad periods of Indian history that saw significant social and cultural change, the attempt is to draw away from the dreary and repetitive history of dynasties and political intrigues. The message to young readers is clear: there is more to history than memorizing names and dates.

The chapters begin with short accounts of the possible lives of children from the different historical eras. So there is Urpi and her brother Kira, potter children from Harappa—a nice touch, since pottery is something that has survived aplenty from this era, Dhani the Indo-Aryan, who is from a peasant family, Madhura, a child maid employed by Emperor Asoka’s family, Divakar whose father is a craftsman who made bronze images for which the Chola period is famous, Salim whose father was a qawwal at the dargah of Sheikh Nizamuddin Auliya, Shaheen whose mother made a living by embroidery in Mughal India and Mini during British rule who found her family opposing her admission to a school. The accounts are imaginary—including the names, which are invented, but they help us to enter the pasts of ordinary folk and of children who are wide eyed but curious and inquisitive about their world. It is an imaginative device to invite young readers to inhabit the past and feel at home in history (since most histories focus on adults) and has been done very successfully in the new set of NCERT textbooks also.