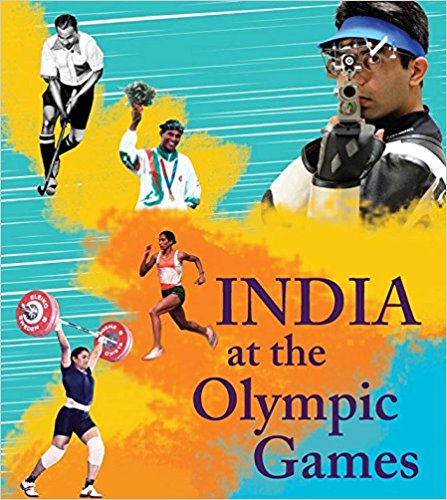 Published this year of the London Olympics INDIA at the Olympic Games is a timely and informative publication. It is also fun!

It begins with a letter from Abhinav Bindra, India’s first individual Olympic gold medalist, where he says: ‘I believe every child should have the chance to play’.

A sensitive observation, in this country of child labour.

Through comical but correct illustrations, the first section presents some invaluable information, such as: ‘A cook from Elis called Coroebus is believed to have been the first ever winner of the first ever Olympic event, a running race called the “stade”. He knew how to burn his calories, didn’t he!.’ The section also provides ‘Activities’ such as map-pointing, identifying jumbled words, and pairing up various sports with their corresponding term or equipment (e.g. Trampoline with Cat leap. Figure skating with Camel spin, or Shooting with Chokebore, whatever they may be!).

The second section provides inspiring biographical sketches of Olympic achievers such as Karnam Malleswari, P.T. Usha, Bachendri Pal, Malathi K. Holla and Devendra Jhajharia. It ends with a quiz and references for further reading and surfing.