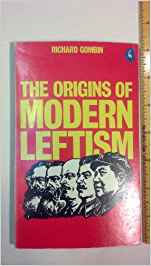 Leftism, as commonly understood, is a blanket term covering everything from reformism to the more eccentric reaches of the New Left. What Gombin means by it, however, is those sections to the Left of the Communist parties which do not claim to be within the Marxist-Leninist tradition and which offer or hope to offer ‘a radical alternative to Marxism-­Leninism as a theory of the labour movement and its development’. The bulk of the book is devoted to an analysis of its principal ideas and their intellectual origins.