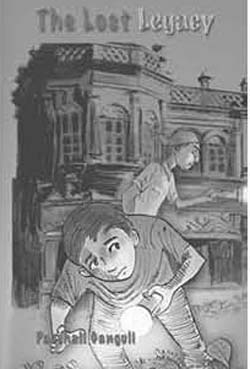 Anand is a fastidious, book-ish 11 yearold who likes learning new words from his thesaurus and prefers living his life in an ordered and disciplined fashion—just the wrong sort of child to be saddled with bohemian parents who live life casually and think nothing of going on impromptu trips to weird places! His parents are at it again, and this time they have dragged him along to visit a friend who lives in the crumbling old mansion of his dacoit ancestors. The house comes replete with hidden passages, overgrown grounds and a tantalizing story of hidden treasure!

The Lost Legacy is Paushali Ganguli’s second book involving Anand and his partner in crime … oops … partner in solving crime: Kamruddin Sheikh, otherwise known as Kammu, the family driver. Kammu’s insistence on talking English (as befits someone who has graduated from stealing cars to the posher job of driving them) is matched by his persistence and inventiveness.
Thrown into this mix are the delightfully brave twin daughters of the host, various other family members and a gaggle of shadowy family retainers. The result is a thumping good mystery that maintains its pace and suspense until the very end. Anand’s natural reticence is soon overcome by his love of solving puzzles, Kammu’s goading and the able assistance of the twins—Putul and Bakul. The end result is satisfying and neatly tied up.
Ms. Ganguli’s characters are immediately likeable and unconventional. Set against the backdrop of the imminent Kali puja, she is in a culturally comfortable zone. While it’s true that the elements of this mystery thriller are formulaic, there is still a sense of expectancy and enough twists and turns to keep the reader happy.
This book is just the right length for precocious young readers to keep at and an engaging day or two for older ones. Without talking down or making the language simplistic, Ms. Ganguli has managed a mystery story that appeals to children of all ages. One gets the sense that she enjoyed writing it every bit as much as it reads and Niyogi Books has done a good job in keeping the layout clean and friendly. As Kammu would say ‘Public wants more Anand stories, Ms. Ganguli’!
Deepa Balsavar is a writer, illustrator and story teller. For over 25 years, she has also been developing educational material and teaching and conducting workshops on script writing, storytelling and illustration for children and adults. Her story book The Seed was chosen by White Raven, Germany as one of the outstanding books for young children, for the year 2006.